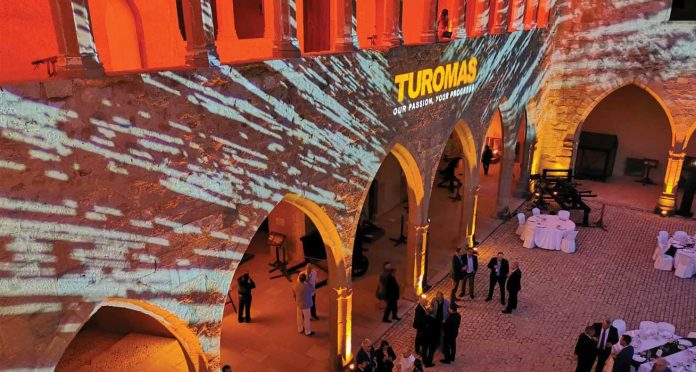 This year’s International Networks! – the third edition of this special event held by Turomas, also included the inauguration of the company’s Centre for Innovation and Special Developments – the cornerstone of the expansion project. 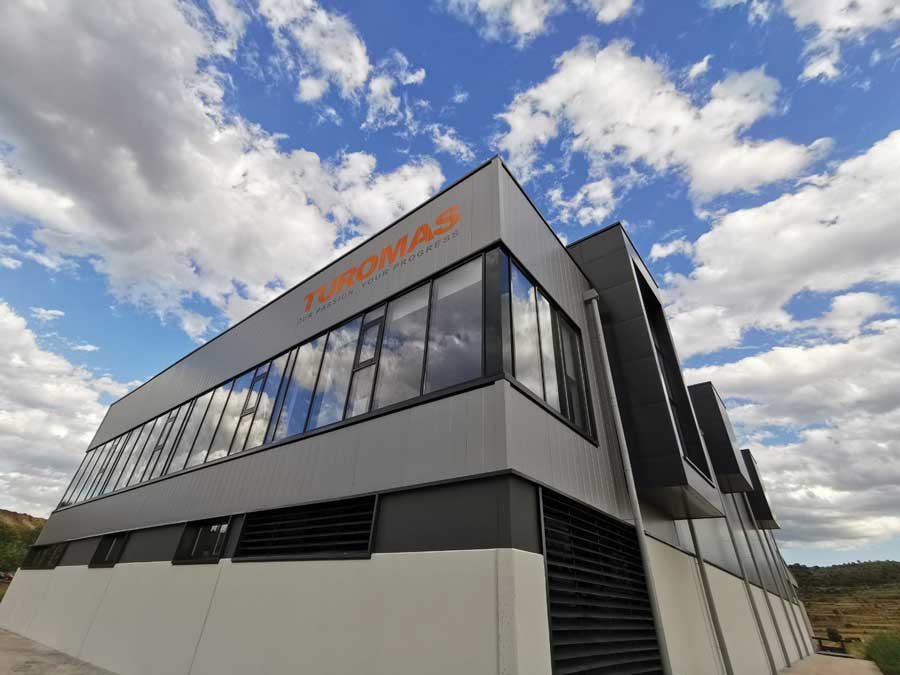 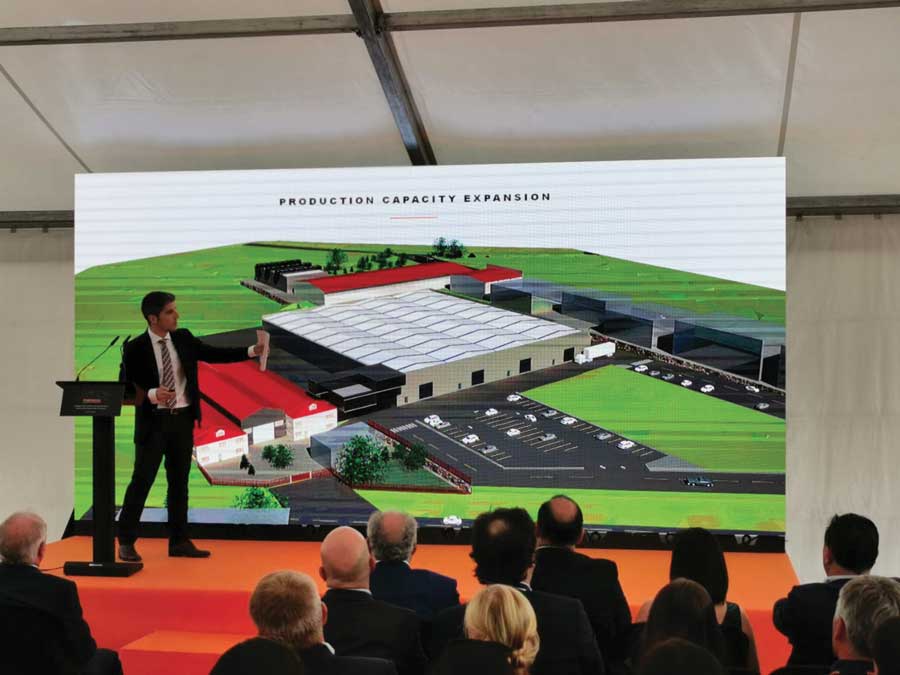 INTERNATIONAL NETWORKS! – INAUGURATION OF CIDET AS THE PROTAGONIST
The opening of the CIDET was held alongside the celebration of International Networks!, a biannual event aimed at the commercial network and some of Turomas’ main customers.
This year was the third edition of the event. The first, in fact, was held in 2015, coinciding with the 30th anniversary of Turomas, while the second in 2017, coincided with the retirement of Miguel Tomás.
This year’s event began with a guided tour of the company’s facilities in the morning, followed by the official opening of the CIDET and a pleasant evening in the medieval castle of Mora de Rubielos with a few surprises for all attendees.
Once more, taking advantage of the dinner time, the work of the best distributor for 2018 was publicly recognised, which went to the
Romanian company Alumni. As well as this honour, the best agent of 2018 was also recognised for the first time, which went to the company Satecris, of Madrid.

INAUGURATION OF CIDET, THE “CORNERSTONE” OF THE TUROMAS EXPANSION PROJECT
Turomas opened its Centre for Innovation and Special Developments (Centro de Innovación y Desarrollos Especiales, CIDET), the cornerstone of the expansion project on 27 July. The Centre is looking to lead efforts in investigation, design and the development of new machines, software and comprehensive solutions.
Those who attended the opening ceremony were the Deputy Mayor of Rubielos de Mora, José Vivó; the Mayor of Mora de Rubielos, Hugo Arquímides Ríos; the Deputy Mayor of Mora de Rubielos, Luisa Vivas; the President of the Spanish Confederation of Freelancers of Teruel and the President of the Gúdar-Javalambre Association, Juan Carlos Escuder; The President of CEPYME Teruel, Juan Ciércoles and the President of the Chamber of Commerce of Teruel, Antonio Santa Isabel.
The Mayor of Rubielos de Mora, Ángel Gracia, and the Provincial Deputy Antonio Amador, as well as Álvaro Tomás and Antonio Ortega, Vice-President and General Manager of Turomas respectively, were also expected to take part. Gracia was, however, unable to attend due to personal reasons and the Deputy Mayor, José Vivó, came in his absence.
Vivó underlined the importance of having a local business generating employment and revitalising the population in what is currently a depopulating area. He also publicly mentioned the effort that is being made by the Town Council to make fibre optics a reality.
The event began with words of welcome and gratitude to the attendees by the Vice-President of Turomas. Álvaro Tomás emphasised that innovation is the cornerstone of future growth but, despite continuing to expand its activity and strengthen its image as an international business, they must not lose the essence and values of the family business that began its activity in 1985.
Tomás expressed his pride in being in charge of a leading Spanish business from Teruel which competes with large German, Austrian and Italian corporations in the flat glass machinery industry.
Currently, as well as its factory in Spain, Turomas has a delegation in Santiago in Chile and another in Sao Paulo. The Latin American market is considered to be one of the most strategic regarding the expansion plan, which is why a third subsidiary will be opened in Bogotá at the end of November. This new subsidiary will be presented at the Colombia Glass 2019 Exhibition. 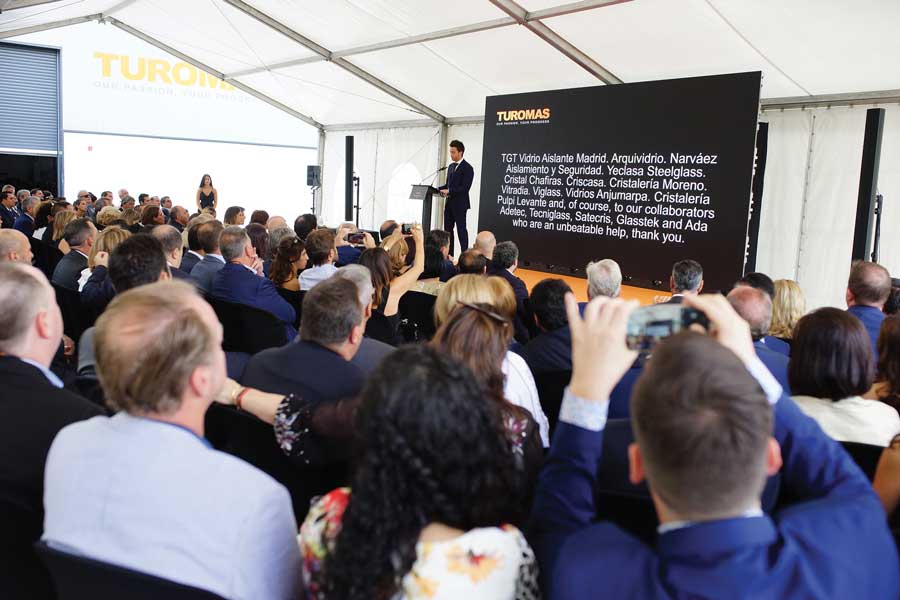 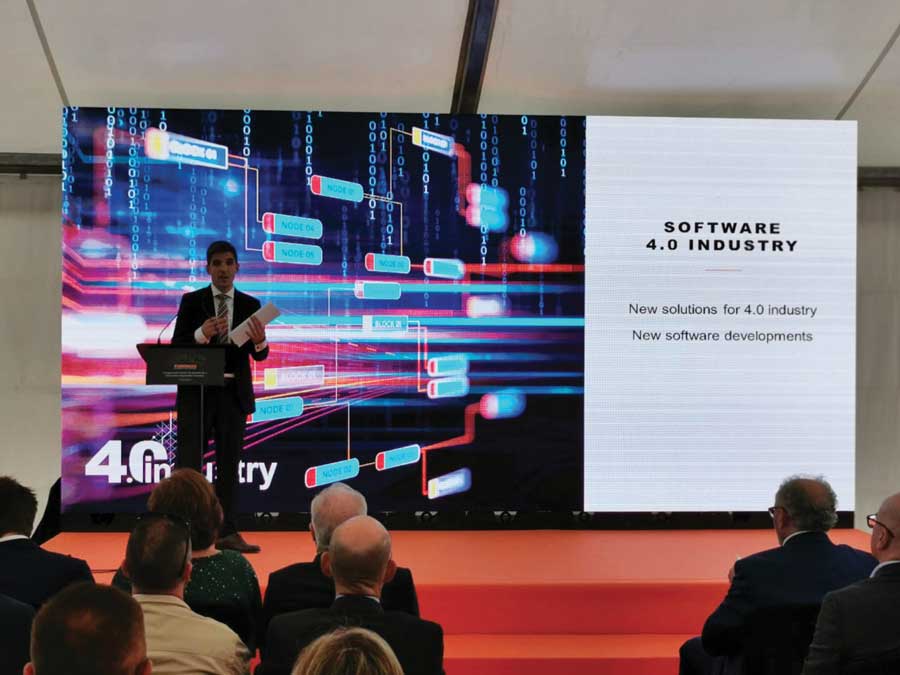 INNOVATIVE SPIRIT
Antonio Ortega structured his speech into two parts. In the first part, he presented the CIDET as a support to the innovative spirit of the Teruel company. The Centre is set up like a new company within the Tur&Development, S.L Group, which will continue working on cutting-edge solutions with technology 4.0, as well as in the development of new product ranges that complement the Turomas development portfolio.
In the second part, Ortega talked about the increase in production capacity which the expansion project will bring with it. Based on an architectural render, it was possible to visualise the current layout of the warehouses and how the space will be with the incorporation of the new ones. In total, five warehouses of 2,000 square metres each will be built.
In addition to the more efficient distribution of spaces with new connections that will shorten distances, investment in advanced machinery and equipment and the creation of interaction spaces for employees, an energy efficiency and saving and environmental sustainability plan will be implemented.

CREATING EMPLOYMENT
Another important point in this second part, was creating employment. In five years, from 2014 to this year, Turomas has doubled its workforce. Today, the Rubielos de Mora company has 100 workers and an organisation chart with new departments as a result of development and specialisation. The expansion plan estimates the generation of at least 50 more jobs.
Additionally, internship agreements with professional training centres and universities will continue to be signed. Students will benefit from an eminently practical training that will complement their learning, easing their incorporation into the job market, and they will provide updated knowledge to the company.
To finish, the General Manager did not want to leave out Turomas’ commitment to Teruel. Miguel Tomás, founder of the company, backed Rubielos de Mora from the beginning and, despite the obstacles, the situation with the area is strengthening.
Álvaro Tomás closed the opening ceremony with a mention to Miguel Tomás. “Miguel is an example of perseverance. Resolve and tenacity are key to progressing and carrying projects forward, despite the challenges. These qualities have helped Turomas to have a notable presence in the five continents.”
Antonio Ortega, CEO of Turomas, explained in detail the Turomas expansion project: “The most important resource a company needs for any project is in the mind. Why do people who have good ideas get paid so much? Because they cannot be mass-
produced. No matter how much money a person has, that money will never be able to generate the great ideas that a mind can create in an empty room.” 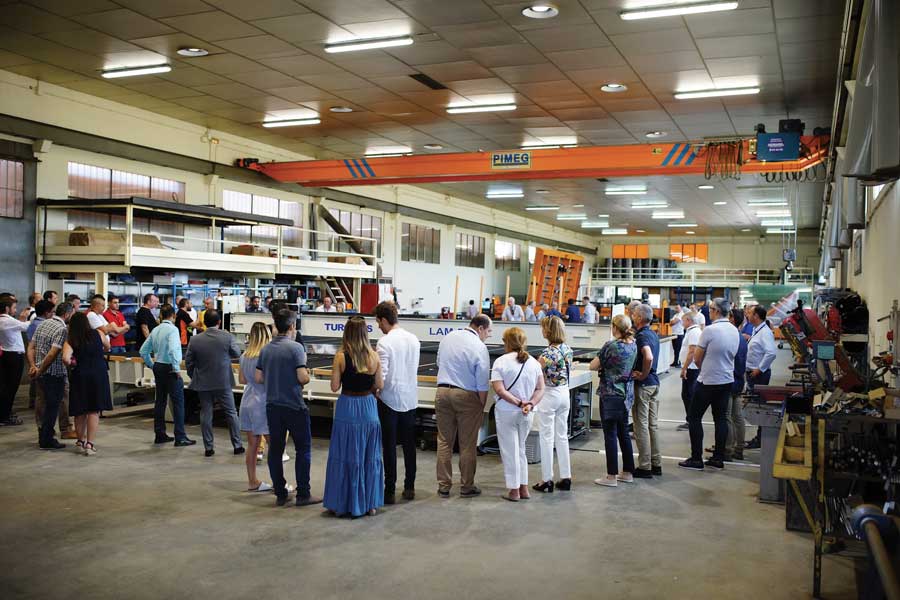 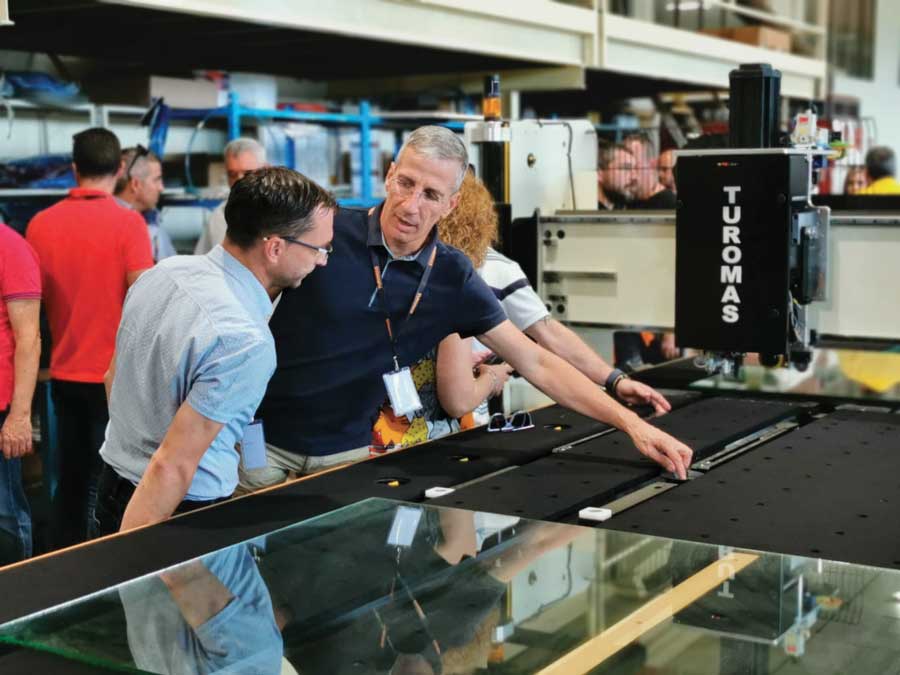 SPEAKING TO TUROMAS
Glass-Technology International (G-TI): This third ‘International Networks!’ – always coinciding with an important event in the history of Turomas – was another special part of the company and its workers. How are the workers distributed among the different departments of the company?

Turomas: On the one hand, most of our workforce is concentrated in the production department. After-sales is another key department for Turomas, so we have increased our investment to improve the service we provide to our customers. The remaining departments such as financial, sales, purchasing, logistic… have less staff than the previous ones, but we talk about experienced people with a high knowledge of the product. On the other hand, we have organized the R&D department in a separate company: TuR&Development.

G-TI: This year saw the inauguration of CIDET – which you call the “cornerstone” of the TUROMAS expansion project. What will be the outcome of this centre as far as technology is concerned?

Turomas: We say that CIDET will develop today the machinery of tomorrow. Turomas has been developing glass cutting machines and smart storage for more than 30 years. Now, we are pretty sure that we can apply all our experience and knowledge in designing and creating not only new software solutions but more efficient, reliable, and competitive machinery. Maybe not only for cutting and storing systems. Only time will show what we are capable of achieving.

G-TI: How is the work towards Industry 4.0 proceeding? What can be the next steps to take?

Turomas: We understand “4.0” as a real revolution for machinery and automation. In fact, we have been working in a new 4.0 software for our entire product range to provide our customers with strategic and valuable data for decision making. Information is, undoubtedly, a source of power. For this reason, we must analyze, filter and process all data to turned it into a useful tool.

G-TI: What can you tell us about the new machinery that you have developed this year?

Turomas: Over the last years, we have been really focused in the smart storage systems. We talk about a complete redesign of our range of loaders. In addition, we have developed new solutions for all sort of glass processors in terms of storage and movement of glass. Moreover, we have applied very important innovations to our cutting machines to adapt them to the new types of glass.

G-TI: What will expansion involve and will there be any new branches opening in other countries or in Spain?

Turomas: The expansion plan of Turomas involves the construction of more than 15 thousand square meters for production buildings to meet all our sales orders. We are not only talking about growth but also about organization. Future facilities will be connected to avoid travel and achieve higher levels in terms of production and efficiency. There is going to be a clear evolution in all processes, which entails a considerable investment in advanced equipment and solutions for our workforce. Other branches of the company will be opened in strategic markets, but only regarding sales and after-sales services (our production force will still be in Spain).

G-TI: What has changed since the previous International Networks! event?

Turomas: Turomas has increased its presence in several markets since its last International Networks!. As a result of that internationalization, we have managed to get more projects in new countries. However, the most interesting aspect is that some of these projects are very ambitious plans of new customers who are betting hard on our brand. We are really happy to have the confidence of some of the most reputable and influential glass processors in the world.

G-TI: What will you be bringing to this year’s Vitrum event? What kind of innovations can we expect to see?

Turomas: If anything characterizes Turomas, it is continuous innovation. At Vitrum, we will share with our customers new interesting solutions that I prefer not to reveal yet, so we look forward to seeing you in October! 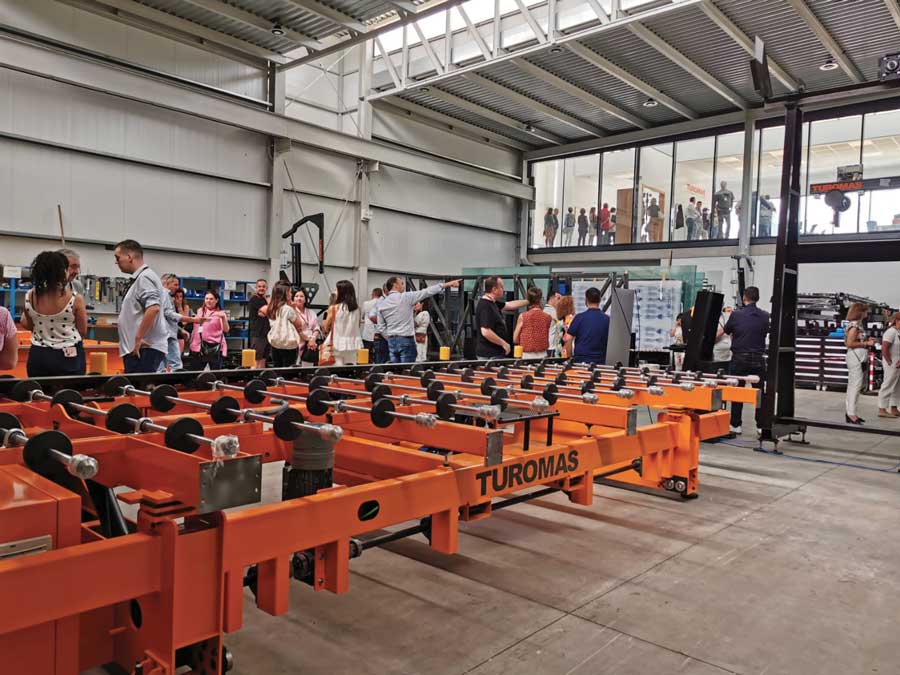 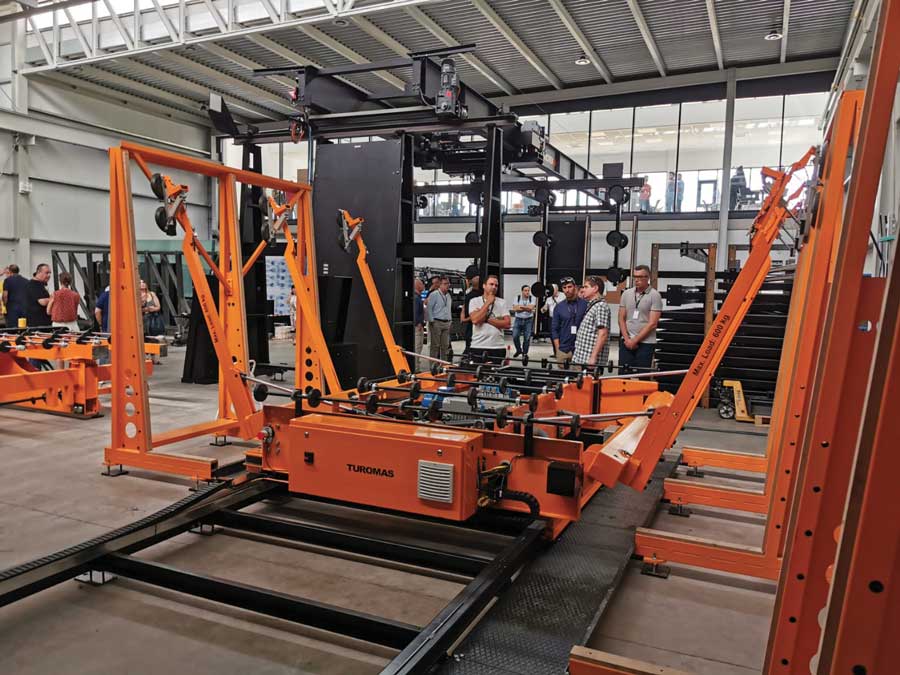 Author of the photographs: Desireé Lamas