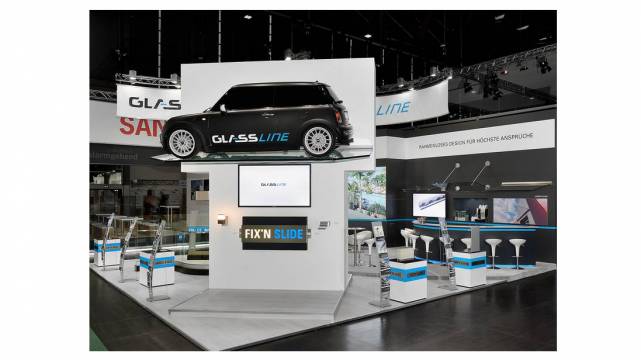 At this year’s Fensterbau/Frontale Glassline exhibited an airborne Mini

The airborne Mini exhibited by Glassline was one of the most impressive exhibits at this year’s Fensterbau/Frontale 2018, made possible thanks to the tripartite laminated glass pane with SentryGlas® ionoplast film from Trosifol™.

One of the most impressive exhibits at this year’s Fensterbau/Frontale 2018 in Nuremberg – the flagship show for windows and doors – was the airborne Mini exhibited by Glassline, from Adelsheim in southern Germany.
With this exhibit, the Adelsheim company demonstrated, beyond doubt, the performance of its “Canopy Cloud” frameless glass, by effortlessly supporting the 900kg Mini. The tripartite laminated glass pane was produced with SentryGlas® ionoplast film from Trosifol™.
Measuring 1.9 x 1.9m, the large pane carrying the Mini comprised two 12mm plies of heat-strengthened glass sandwiching two 1.52mm thick SentryGlas® films, in turn separated by a 6mm ply of heat-strengthened glass. With this composition, the pane can actually support a weight of 930kg, for snow loads, for example.
The large pane was flanked by two smaller panes, measuring 0.6 x 1.9m with the same construction. From a distance it was practically invisible, so visitors were surprised on approaching the exhibit to discover that it was a pane of glass supporting the Mini.
The idea came from Glassline’s marketing department. In the discussion on how to best showcase the high loading capacity of their own canopies, no limits were initially imposed, with talk of elephants, aquariums, and dummies.
Finally, marketing employee Sina Münch came up with the idea of the car, which was ultimately selected. “The response was overwhelming,” says her delighted colleague Stefanie Berg, Glassline Marketing Manager. “Visitors were constantly taking pictures of the Mini, including selfies, and posting and sharing them on social media!”