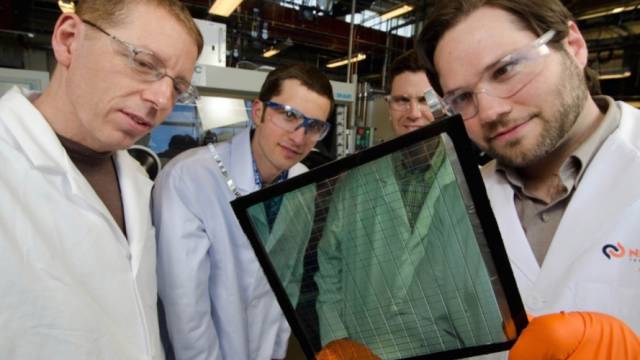 The International Energy Agency projected that renewable energy will represent the largest single source of electricity growth by the end of the decade.

Several factors are expected to contribute to the increasing adoption of green energy, including falling costs, expansion in emerging economies, continuous technological innovations that make energy generation and preservation more efficient and effective, as well as growing investments in alternative energy sources.
According to a report by Sandler Research, the global renewable energy investment market to exceed USD 350 billion by 2020. Investments in the solar and wind energy are increasing considerably.
Looking at the US market, the Solar Investment Tax Credit (ITC) has provided industry stability and growth since 2006 where it has experienced a CAGR of about 60%. Investments and new state policies favoring green energy provide companies with the opportunity to increase their R&D and marketing efforts, which helps greater innovation potential. Solarwindow Technologies Inc., Corning Incorporated, Covanta Holding Corporation, Pattern Energy Group Inc, SunPower Corporation
A report by Grand View Research points out that wind technology is economical today in majority power markets and that accomplishments of green marketing in harnessing wind power, has given rise to the domestic public interest in the sustainable electric generation technology. Photovoltaics, best known as a method for generating electric power by using solar cells, have also generated interest, but the future of solar is in future technologies. The research indicates that the idea of zero energy homes also known as solar building homes has been trending. Solar building technologies supply heat, electricity, light, hot water, and cooling to residential and commercial buildings. Besides wind and solar, another alternative energy source expected to attract more attention is the Waste to Energy (WTE). Global Market Insights projects the WTE market size to surpass $33 Billion by 2023, growing at CAGR of 6.1%.
Solarwindow Technologies Inc. creates transparent electricity-generating liquid coatings. When applied to glass or plastics, these coatings convert passive windows and other materials into electricity generators under natural, artificial, low, shaded, and even reflected light conditions. The company’s liquid coating technology has been presented to members of the U.S. Congress and has received recognition in numerous industry publications. The SolarWindow™ technology has been independently validated to generate 50-times the power of a conventional rooftop solar system and achieves a one-year payback when modeled on a 50-story building.
Previously on January 18th, Solarwindow Technologies Inc. announced their plans to “develop electricity-generating flexible glass. SolarWindow scientists and engineers recently applied layers of the company’s liquid coatings on to Corning® Willow® Glass and laminated them under conditions that simulate the high pressure and temperatures of the manufacturing processes used by commercial glass and window producers. The result is a bendable glass ‘veneer’, as thin as a business card, which generates electricity. SolarWindow anticipates installing these sheets of electricity-generating glass veneers over existing skyscraper windows, turning entire buildings into vertical power generators and helping reduce their carbon footprint.” The Corning(R) Willow(R) Glass is developed by Corning Incorporated (NYSE: GLW), a company with expertise in specialty glass, ceramics, and optical physics.
Earlier this month Solarwindow Technologies Inc. announced that it has been named a winner in the 2017 BIG Innovation Awards presented by the Business Intelligence Group. “The BIG Innovation Awards recognize companies and people who bring new ideas to life, and change the way we experience the world. Organizations from across the globe submitted their innovations for consideration in the 2017 BIG Innovation Awards. Nominations were then judged by a select group of business leaders and executives who volunteer their time and expertise to score submissions and provide feedback.”
Covanta Holding Corporation is a provider of sustainable waste and energy solutions. Yearly, Covanta’s modern Energy-from-Waste facilities safely convert roughly 20 million tons of waste from municipalities and businesses into clean, renewable electricity to power one million homes and recycle approximately 500,000 tons of metal.  Through a vast network of treatment and recycling facilities, Covanta also provides comprehensive industrial material management services to companies seeking solutions to some of the most complex environmental challenges we face, today. For the twelve months ended December 31, 2016, total revenue increased by $54 million to $1.699 billion from $1.645 billion in 2015.  Overall, higher waste and service revenue more than offset a decline in energy revenue.
Pattern Energy Group Inc. has a portfolio of 18 wind power facilities, including one it has agreed to acquire, with a total owned interest of 2,644 MW in the United States, Canada and Chile that use proven, best-in-class technology. Pattern Energy’s wind power facilities generate stable long-term cash flows in attractive markets and provide a solid foundation for the continued growth of the business.
SunPower Corporation and Cajon Valley Union School District will work together to construct its SunPower® Helix™ solar systems at 24 school sites in the El Cajon region of San Diego County. The solar installations totaling 4.6 megawatts will mostly include carports, as well as a few rooftop systems, and should be operational by the end of 2017. “With CVUSD’s solar investment, we continue to enrich both our schools and our communities by generating clean, renewable energy which will help save on electricity costs and improve our local environment,” said Assistant Superintendent of Business Services at Cajon Valley Union School District, Scott Buxbaum. “After reviewing qualifications and proposals from six firms, we are very pleased to have selected SunPower’s proposal as the best value to the District. Their team has been great to work with.”