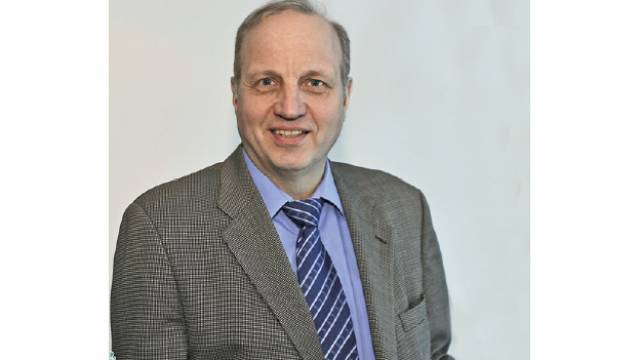 Jorma Vitkala has been unanimously voted Glass Builder of the Year 2013 by the Finnish Flat Glass Association. Vitkala was named because of his achievements as the initiator and organizer of the Glass Performance Days (GPD), which is held biennially in Tampere, and is the world’s largest glass industry conference.

The Board of the Finnish Flat Glass Association, Suomen Tasolasiyhdistys ry, has unanimously voted Jorma Vitkala Glass Builder of the Year 2013, for his achievements as the initiator and organizer of the Glass Performance Days (GPD). Held biennially in Tampere, GPD is the world’s largest glass industry conference.
Through this choice, the association wishes to honour the chairman of the GPD organization committee, Jorma Vitkala, for more than two decades of dedicated and professional effort, as well as personal commitment, as the organizer and developer of the conference in addition to his other work.
Through his activities, he has promoted cooperation and information exchange within the glass industry, both in Finland and internationally, while establishing Finland within the industry and as a conference location.
When touring the world as a service and training engineer for Tamglass in the early 1980s, Jorma noticed that the same early-phase mistakes were being made everywhere. The idea of glass-specific process training for the company’s customers was conceived and GPD was born. “Without a doubt, Jorma is the most international and best-known Finnish glass expert and his networks are peerless,” comments Tahvo Sutela, founding member of the Flat Glass Association’s board and the GPD organization committee.
On his trips around the world, he has not only acquired an extensive network and many friends, but also a taste for good food. A gastronomy and wine expert, Jorma is a member of the international Chaîne des Rôtisseurs.
Thousands of GPD visitors have profited from his passion over the years, while enjoying the six-course gourmet dinners and excellent wines carefully selected by Jorma each year and served in unlikely surroundings – from Glaston’s new machinery hall to the historical factory setting of Tampere City Museum.
Another speciality of his are the evening programmes of the conferences, particularly special activities, which have occasionally met with mixed feelings. According to Jorma, the goal is to offer the guests not only information but also experiences: “The Farewell Party in the land of midnight sun has been an unforgettable event for many visitors from abroad. It is much easier to talk to total strangers at a party if everyone is dressed up in the same funny way,” he notes and adds with a laugh, “Koskenkorva schnapps served in eggshells turned out to be more memorable than the keynote speaker!”
Tim Macfarlane, a London-based glass consultant, has done groundbreaking work on using glass as a structural material. A frequent participant in the GPD, he lavishes praise on the event: “Jorma has turned the GPD into an essential event for everybody interested in glass and its use in construction and the vehicle industry. In the last 20 years, he has charmed and entertained participants from all over the world and offered them a forum where they can exchange ideas and learn from one another. Not only does Jorma remember the names of hundreds of participants during those unique summer night parties, but he always knows who should be introduced to whom. There’s no other organizer and director like him in the glass business, and his name is known internationally. I hope that his unique mixture of humour and boldness will continue to grace GPD events.”
SAFA architect Matti Rautiola, General manager of the Building Information Foundation RTS, has been Jorma’s sparring partner in the choice of architectonically interesting objects and speakers since 1999.
He has been impressed by the latter’s astonishing ability to attract top architects, as well as glass experts from all over the world: “Jorma has a fun, original way of doing things and an incredible talent for paying personal attention to each and every guest, while keeping a grip of several events at the same time.
Matti hopes that more Finnish architects and students to participate in the conference: “The conference has plenty of contacts and information to offer, which architects could use in their projects. I fully understand how important time and money are in the daily business of architecture offices, and I know that most architects are based in Helsinki. For students, early June is an inconvenient time. Nevertheless, I believe that participation is rewarding.”
The GPD 2013 will be held in Tampere 13-15 June. The conference will include 170 presentations and feature more than 20 workshops. The workshops focus on specific glass processes, structural silicone glazing and the structural performance of laminated glass. In addition, the workshops highlight well known buildings including, the Louis Vuitton Foundation’s glass sails, designed by FRANK GEHRY, at the Jardin d’Acclimatation in Paris and WTC Tower One, designed by SOM, in New York. Examples will be presented in great detail and have been selected with “All architects and structural designers in mind”, Jorma points out.
The complete workshop schedule for GPD 2013 is available at www.gpd.fi.