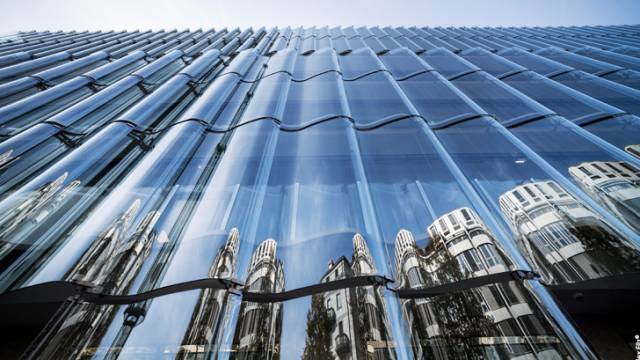 A new office building with a unique façade is being built in Zurich. The building’s extremely interesting, powerful undulating glass envelope creates the overall effect of a glass skin.

A new office building to plans by Diener & Diener Architekten is currently being built at the headquarters of Swiss Re Ltd. in Zurich.
The company carrying out the work, Frener & Reifer, is responsible for, among other things, the powerful steel transom/mullion façade and the front-mounted undulating glass façade of the new building at Mythenquai.
The new building is characterized by its unique façade, an extremely interesting, powerful undulating glass envelope. The transparent material is used here as a building block to create the overall effect of a glass skin.
The six floors of the light-filled building blend in effortlessly and elegantly with the prominent lake front at the lower basin of Lake Zurich.
The undulating glass harmonises with the waves of the lake while its soft lines and associated light and shadow effects break the rigid surface of the material.
Over 900 vertically arranged glass wave units will be fabricated, attached to stainless steel mounting brackets and connected by rods to form the 6,475 m2 large front-mounted undulating glass façade. The installation of the thermal façade began in September 2015.
The general planner for the project is Swiss Re Next, in collaboration with Diener & Diener Architekten AG and Proplaning AG, who are also responsible for construction management and supervision.