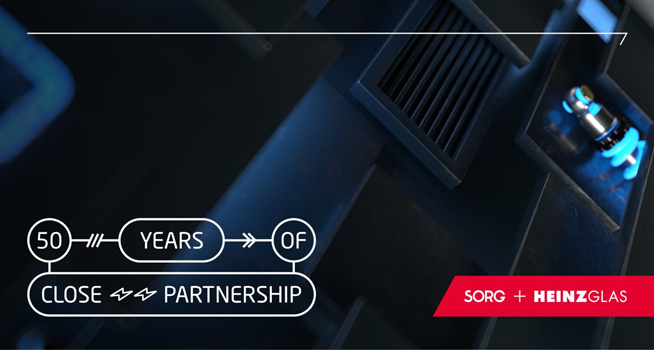 Since investing in SORG‘s first ever all-electric furnace in 1971, Heinz-Glas has grown to become a world-leading specialist in luxury glass flacons and caps for iconic perfume and cosmetic brands.

Making waves in sustainable melting
In the late 1960s, electricity was used mostly for additional energy input, and with very limited applications. The glass industry also faced increasing pressure to seek cleaner alternatives to fossil energy as plants on ‘historical sites’ were surrounded by growing towns. SORG started developing the idea of an all-electric furnace, which would achieve greater efficiency than fossil heating, by transferring energy directly via electrodes in the glass.

Using a laboratory at the company’s site in Lohr am Main, the first Vertical Super Melter (VSM®) was built with a melting surface of 1.4 m² and fully equipped for testing different glass types. Charged from the top, the insulating effect of the cold batch covering the glass melt reduces energy consumption. Changing the horizontal melting process to a vertical one, our revolutionary concept also reduced the glass melt surface for fewer losses and created a dust-free environment.

Fully charged for the future
To challenge conservative industry perceptions, SORG conducted test melts for customers to demonstrate the reliability of the new furnace technology, especially the glass quality, which was critical for customers like Heinz-Glas. In 1972, the patent was finally granted and throughout the following decade, 26 VSM® furnaces were put into successful operation worldwide.

Today, SORG is proud to be strengthening the sustainable melting capabilities of Heinz-Glas even further, with a new furnace at its site in Działdowo, Poland. Powered by renewable energy, this will help to significantly increase the daily tonnage of speciality glasses like opal and flint, as well as the potential of post-consumer recycling glass (PCR).