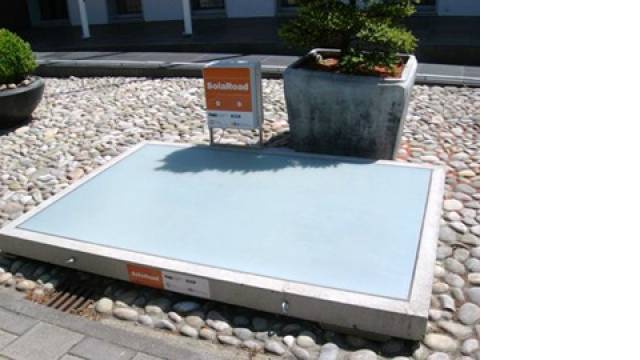 Photovoltaic road units have gone into production for a trial on a cycleway starting this autumn in Krommenie.

Prefabricated photovoltaic (PV) road units have gone into production in the Netherlands in advance of a full-scale trial on a cycleway starting this autumn. The system, dubbed “SolaRoad”, has been developed by a consortium of Dutch research institution TMO, contractor Ooms Civiel, multidisciplinary consultant Imtech and the province of Noord-Holland. The units use silicon PV cells under a 10mm tempered safety glass surface with a skid resistant coating. Units are made up of two layers of glass over and under the PV cells, which are mounted in a precast concrete frame. The electricity they generate will be fed into the Dutch national grid. In the first phase of the trial, 70 meters of the cycleway will have the first generation units installed, with a further 30 meters of second generation units due to be placed after six to nine months.
The trial in the small town of Krommenie, north west of Amsterdam, along the provincial road N203, and is intended to test the durability and safety of the glass road surface as well as energy generation performance.
“Traffic is heavy on the cycleway, so we will be monitoring the effects of shading from cyclists on energy production,” says TNO lead architect and systems engineer Stan Klerks. “This will be a ‘living lab’, so the reaction of the public to the new surface will be interesting.” Their resistance to weathering, wear and tear and impact will be under close scrutiny, Klerks says. How the translucent glass surface will be kept clean to maintain generation efficiency is another key area to be investigated, as is skid resistance during wet and icy conditions.
Other issues considered during the development of the units include potentially distracting reflections from the glass surface, and ride quality. The units will be bedded on compacted sand and gravel and locked together into a smooth surface to maximise ride quality, Klerks says.
SolaRoad acknowledges that, if the technology was installed on a national scale, the major challenge would be storing surplus electricity, as peak output would rarely coincide with peak demand. This is a problem for most forms of sustainable energy, and considerable development work is in progress on vanadium redox batteries and other forms of electricity storage. SolaRoad expects to take advantage of these new technologies as they become available.
In the longer term it is hoped that one significant storage option will be the batteries of electric vehicles and bicycles. It is even possible that later generations of electric vehicles may be able to draw current directly from the solar road surface.