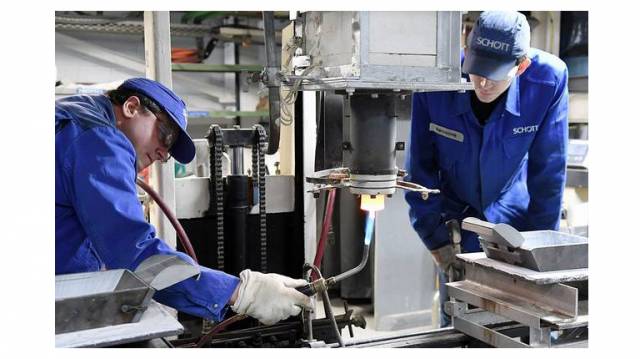 Heating up a glass plug to allow 1,800°C molten glass to pass through

Germany-based SCHOTT has rebuilt its glass plant in Duryea after the fire that affected approximately 40,000 square feet of the plant.

When a fire hit SCHOTT North America’s Duryea glass plant in March 2015, employees were unsure what would happen to their jobs. During the fire, in fact, approximately 40,000 square feet of the plant was affected.
“We didn’t think we were going to be back,” said grinder/polisher Stanley Budzilek, a Dupont resident and 45-year employee at SCHOTT North America’s Duryea plant. “There was so much damage. It really devastated the plant.”
On June 10 — over two years after the fire that caused approximately USD 50 million in damage to the plant — SCHOTT North America held an open house to show the USD 20 million in renovations and refurbishing carried out since 2015. The project isn’t complete yet, but Plant Manager Mike Platt said renovation doesn’t mean just a new coat of paint — the facility has added new equipment and has more on the way.
“We’re going to be building a new melting facility for some of our glasses that we provide to other SCHOTT locations, and we’ve got additional investment into some smaller optics manufacturing,” Platt said. “The new equipment we’re getting in here allows us to make the smaller glasses, the more higher-precision glasses that need to be used in the precision glass industry.”
The plant focuses on high-tech glasses such as laser glass, found in devices used for hair, tattoo and wrinkle removal.
State Rep. Mike Carroll said he was happy to see the German glass maker reinvest in Duryea.
“When the fire occurred, you hold your breath a little bit with respect to what comes next,” Carroll said. “You’re just hoping the leadership in Germany will recognize the fine work done here in Duryea and rebuild after the fire.”
Platt said the plant isn’t just rebuilding — it’s growing. The space is smaller (a warehouse lost during the blaze was not rebuilt), but approval came this week for another USD 1 million in equipment and renovation. SCHOTT’s reinvestment means jobs for the Duryea plant. Platt said there are currently 14 open positions at the facility and he expects to grow his staff of approximately 140 by 10% over the next year.
“We want to put all of that behind us now,” Platt said of the 2015 fire. “This is an exciting time where families have lived through a lot of this. The plant was closed for a good portion of time. A couple years ago, we were closed in some areas over 30 days.”
The facility’s warehouse wasn’t just closed after the fire — it was completely lost. Schott currently utilizes a nearby warehouse, but Platt said future plans may include a new in-house storage option to go along with the plant’s new equipment and jobs.
“If business continues to expand at the rate it is, we’re considering building another warehouse,” Platt said, “because of the fact we have to transport things over railroad tracks all the time and we are making glass.”