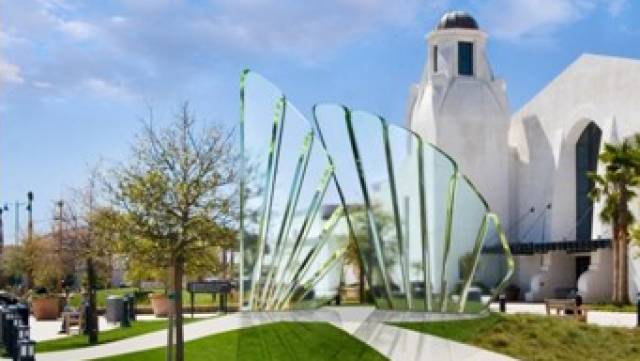 The new sculpture for the Santa Barbara Airport will consist of overlapping laminated glass ‘feathers’ to resemble wings and is lit with LED lights on top of a small grassy knoll near the front of the terminal. The 20-foot glass sculpture honouring World War II veterans – men and women stationed at the airbase.

The Santa Barbara Airport is to receive a tribute to its role as a Marine Base from 1942-1946, with a new pair of wings. The 20-foot glass sculpture honouring World War II veterans has been in the works since 2010 when the Airport put out a call for a piece honouring the men and women stationed at the airbase.
The sculpture, which will be arched to allow visitors to walk through it, consists of overlapping laminated glass ‘feathers’ to resemble wings and is lit with LED lights on top of a small grassy knoll near the front of the terminal.
Douglas Lochner, sculptor of the project, said there are some engineering details still to be worked out, but said it will feature technological innovations such as self-cleaning glass.
“This sculpture is there to essentially celebrate the men and women in World War II who sacrificed themselves to bring peace to the world,” Lochner said.
The project has the approval of the Arts Commission, veterans groups, and the Visual Arts in Public Places Committee. John Blankenship, founder of the Pierre Claeyssens Veterans Museum, which is providing funding for the sculpture, said Lochner’s concept had been well received in the community.
“We think it’s a most fitting tribute to the men and women of World War Two,” Blankenship said at a Conceptual review of the project before the Architectural Board of Review.
The ABR board members agreed, noting that the piece had a very subtle feel that blended well with the surrounding area. Board member Paul Zink said the piece is a great example of the kind of artwork that will draw people in rather than admired from afar.
“It’s a wonderful approach to ‘touch and feel’,” Zink said.
However, some board members felt the sculpture might clash with the historical tower if put in the wrong place and the grounds near the sculpture area should have a little less cement. Board member Gary Mosel thought the surrounding walkways should be smaller to allow more greenery and landscaping: “I think there should be a little more landscape than hardscape,” Mosel said.