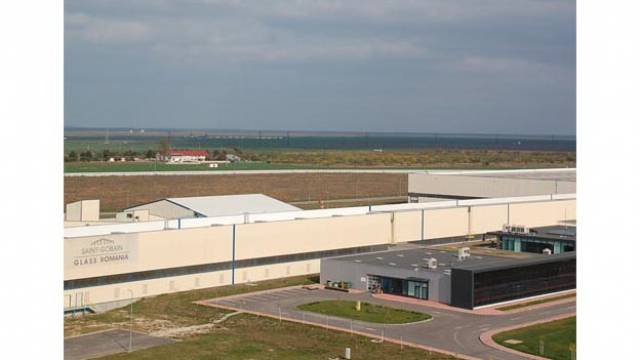 Saint-Gobain’s Romanian division has invested EUR 6 million in a laminated glass production line, taking the company’s total investment so far in Romania to EUR 176 million. The new production line is part of its factory in Calarasi, southern Romania.

The Romanian division of French glass manufacturer Saint-Gobain, has invested EUR 6 million in a laminated glass production line in its factory in Calarasi, southern Romania. This takes the company’s total investment so far in Romania to EUR 176 million, said Jerome Lionet, GM of Saint-Gobain Glass Romania.
The investment is part of the company expansion strategy in Romania as well as the neighbouring countries given that the manufacturing platform in Calarasi was designed as a regional centre that serves not only the local market, but also the other markets in the Balkans.
Despite the crisis, there is a great potential for market growth in Romania and other countries in the region especially when it comes to more advanced products such as laminated glass, says the manufacturer.
At present Saint-Gobain Glass Romania exports about half of the glass products it manufactures locally mainly to neighbouring countries. Exports of laminated glass are expected to have a similar share of the total production. The new line has a production capacity of 2 million sq.m. of glass per year.
Saint-Gobain estimates the Romanian glass market reaches some 16 million sq.m. and will grow by between 2 and 3 percentage points in 2013. However, the company predicts a higher market increase in term of value, as Romanians are looking to buy more advanced products with a higher added value.
On the domestic market, 80% of last year’s sold volumes went to the residential sector and renovation projects in particular, 15% to office the office sector and the remaining 5% to the industrial sector.
Saint-Gobain Glass Romania reported a turnover of EUR 65 million last year and in 2013 it targets a 10% increase. Half of this growth should be generated solely by the launch of laminated glass production.
In addition to the glass business, Saint-Gobain Group is present in Romania with three other companies – Saint-Gobain Construction Products, MTI Impex Brasov and Brodrene Dahl. The four companies employ a total of some 1,000 employees and operate 12 production units in seven industrial sites located in Brasov, Branesti, Calarasi, Ploiesti, Satu-Mare, Turda and Suceava. Last year, Saint-Gobain Group Romania reported a turnover of EUR 145 million.
Saint-Gobain Glass is the largest glass producer in Europe and the second largest glass producer in the world, with sales of more than EUR 1.615 billion in 2012, according to company data.
The company entered the Romanian market in 2005, and started glass production in 2007, once the building of the factory in Calarasi was completed. The factory employs some 540 people.
Saint-Gobain reported global sales of EUR 43.2 billion in 2012. It is present in 64 countries and has nearly 193,000 employees.