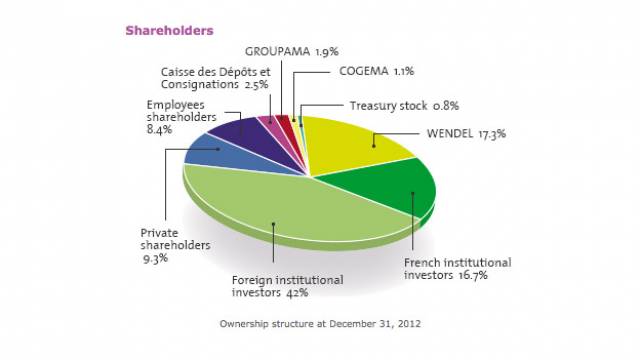 At the Annual General Meeting of Compagnie de Saint-Gobain shareholders, held 6 June 2013 in Paris, France, shareholders present or represented held an aggregate 67.74% of the outstanding shares, and all resolutions were adopted.

The Annual General Meeting of Compagnie de Saint-Gobain shareholders was held on 6 June 2013 in Paris. Shareholders present or represented at the meeting held an aggregate 67.74% of the outstanding shares. All resolutions were adopted.
Jean-Martin Folz and Gilles Schnepp were re-elected to the Board. Agnès Lemarchand, Pamela Knapp and Philippe Varin were elected as directors (to replace respectively Gerhard Cromme, Jean-Cyril Spinetta and Michel Pébereau).
Pamela Knapp, a graduate of Freie Universität Berlin and Harvard University, is Chief Financial Officer, responsible for Central Services and a member of the Management Board of GfK SE. She previously worked at the Siemens Corporation, first as Head of the Corporate Development Executives Department, then as Chief Financial Officer of the Power Transmission & Distribution Group. She was a member of Group Executive Management. Ms. Knapp also serves on the Supervisory Board and Finance and Audit Committee of PSA Peugeot Citroën and on the Board of Directors of Hostettler, Kramasch & Partner Holding AG (HKP).
Agnès Lemarchand is Executive Chairman of Steetley Dolomite Ltd. She holds degrees from Ecole Nationale Supérieure de Chimie de Paris and the Massachusetts Institute of Technology, as well as an MBA from INSEAD. She previously worked at the Lafarge Group, first as Director of Strategy at Lafarge Specialty Materials, then as Chief Executive Officer of Lafarge Chaux. Lemarchand is a member of the Board of Directors of CGG Veritas and of the Supervisory Boards of Areva, Siclaé and Mersen.
Philippe Varin, Chairman of the Managing Board of PSA Peugeot Citroën, is a graduate of Ecole Polytechnique and Ecole des Mines de Paris. Before joining PSA Peugeot Citroën, he served as Senior Executive President, Aluminum and Member of the Executive Committee of Péchiney, as well as Chief Executive Officer of European steel manufacturer Corus. Varin is also a director of Faurecia and Chairman of Cercle de l’Industrie.
Shareholders also approved the payment of a dividend of EUR 1.24 per share (unchanged from 2011) and the option to reinvest the dividend in new shares of company stock. The price of the new shares issued upon reinvestment of the dividend will be EUR 28.12, after applying the maximum 10% discount.
A webcast of the Annual General Meeting and the results of the vote on each resolution are now available on the company’s website (www.saint-gobain.com).