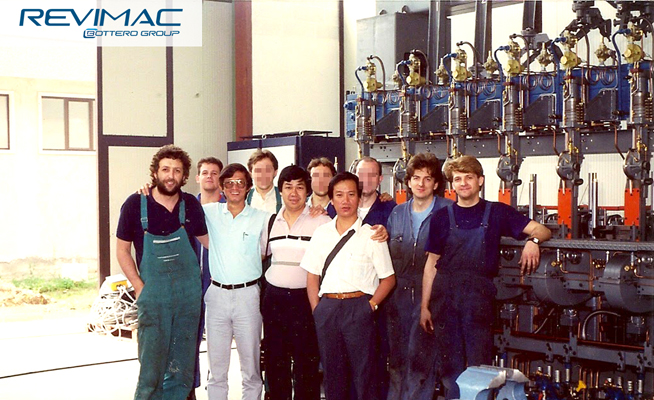 Once upon a time in Sovizzo, more or less at the same time of the fall of the Berlin wall, somewhere in the outskirts of Vicenza and within the boundaries of a suburban industrial area in Italy, there was a tiny 400 square metre workshop.

In those modest premises, a bunch of young enthusiastic hard working visionaries started the ball rolling under the flag of a freshly founded company called Revimac Srl.

The idea behind the whole story comes from the motto one Italian globe-trotting salesman (a sort of a soldier-of-fortune) picked up from an old Dutch-American buccaneer, that sounded something like this: “your trash is my cash!”

This down-to-earth concept, applied to the glass industry environment of those good old days, meant getting hold of dismissed I.S. forming machines and bringing them back to new life to re-start blowing glass bottles day and night and maybe make some money out of this business.

The idea was somehow sold to the management of an Italian industrial group, that after some hesitation sponsored it and eventually gave a green light to start the activity.

After some 32 years, one may say that the original vision was not that wrong since the story is still going on right now, and most of the glass industry people in the world know who Revimac is today.

The picture attached to this remembrance shows the staff of those very early days in Sovizzo and, believe it or not, four members of the original wild bunch are still there as alive and kicking as ever. Revimac’s deus-ex-machina!

The “Che Guevara look-alike” depicted on the extreme left, wearing a dirty yet stylish green salopette is nothing less than Mr. Revimac in person, alias Rolando Bajo, the iconic founder partner and current company boss who, despite the wear and tear of injuries, is still the volcanic driving force behind the all works.

In the background, sticking his neck out of the crowd and hardly recognizable, Roberto Sandri is there, also known as the “king of the junkyard.” In fact, he is the only person who can help you to find some hard-to-get antique pieces lying hidden somewhere in the IS machines graveyard. The scrap cast iron diviner!

In the middle of the group, some good and loyal customers from South-East Asia who came along with the notorious globetrotter to inspect their freshly re-built IS machine before despatch.

The penultimate guy on the right hand side, in beat-generation mood is Daniele Rigolon, alias “Mr. Bolts&Nuts,” who knows the type of thread of the very last screw of the damned I.S. machine. The same applies to piping & tubing. The I.S. Wikipedia in flesh and bones.

At the very end of the group, boasting an outrageous rockabilly hair style, we have the legendary Beppe Grolla. He himself cannot remember all the definitions and nicknames he collected in decades of outstanding service worldwide when dazzling in spider-man fashion from one feeder to the other. To me, the “Octopus of Mers les Bains” is the one that suits him best. Overwhelmingly tentacular!

From the “Spoon River nonsense anthology” of Revimac’s Ghost Writer.