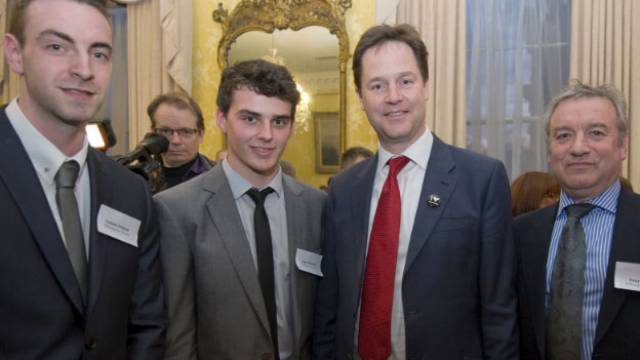 At a recent reception hosted by the Deputy Prime Minister to celebrate apprenticeships and showcase the contribution they make to the economy, two apprentices from Pilkington were recognized for their achievements.

Apprentices from St Helens-based Pilkington Glass were recognized for their achievements at a reception hosted by the Deputy Prime Minister to celebrate apprenticeships and showcase the contribution they make to the economy.
Daniel Crehan (21) and James Bourne (18), both from St Helens, attended the reception at Admiralty House, Whitehall, on 13 March, alongside other outstanding apprentices from across the country. The pair, who attended with Business Development Manager Tony Smith, were invited after the Deputy Prime Minister was impressed on a visit to the firm in December.
Deputy Prime Minister Nick Clegg said: “Apprentices not only make an invaluable contribution to their employer, but to the economy as a whole. We’ve seen a record number of businesses clamouring to take on apprentices and that’s because they know what a huge difference the talent and ambition they bring can make. We’re also making it simple and rewarding for companies to take on apprentices – from mechanics to the hospitality trade.”
“I was delighted to welcome Daniel and James to Admiralty House, after being hugely impressed when I visited Pilkington Glass last year. It’s clear they are making a valuable contribution and their hard work now will no doubt set them up for a bright future.”
More than 2,850 people started apprenticeships in St Helens last year, more than double the number that started in the region two years previously.
The reception, held as part of National Apprenticeship Week, was attended by apprentices the Deputy Prime Minister has met, as well as runners up and winners of the National Apprenticeship Awards 2012. It was also held to launch a new campaign, Made by Apprentices, which will highlight the creative talents of apprentices by showcasing their work.
National Apprenticeship Week celebrates and promotes apprenticeships and the positive impact they have on individuals, businesses and the economy. Record numbers of businesses are taking on apprentices and the number of new apprenticeships nationwide increased last year by around 14 per cent, topping the half a million mark.
Apprenticeships bring vast benefits to the economy with apprenticeships forecast to contribute GBP 3.4 billion to the economy by 2022. The average apprentice increases business productivity by GBP 214 a week.