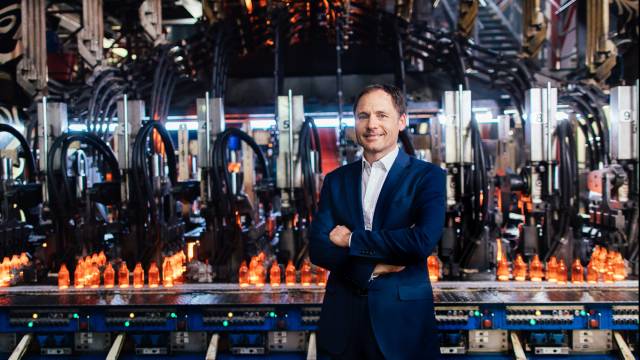 Oliver Wiegand has been selected as the 48th recipient of the Phoenix Award and ‘Glass Person of the Year 2018’.

The Phoenix Award Committee has announced that Oliver Wiegand will be the 48th recipient of the Phoenix Award and ‘Glass Person of the Year 2018’.
Oliver Wiegand is an individual who has glass in his blood; the history of the Wiegand family and its glass roots can be traced back 450 years. Oliver has grown up in the family business surrounded by glass production throughout his whole life, supported, guided and influenced by three generations of leading European glassmakers who understood the values of using modern technology, while keeping family values and traditions over the many years of growth within the Wiegand-Glas Group. Today, Oliver Wiegand forms the 4th generation and is the joint CEO of Wiegand Glas along with his cousin, Nikolaus Wiegand.
The Committee has selected Oliver Wiegand to receive this year’s prestigious Phoenix Award in recognition of his forward thinking and drive to embrace new technology that allow his four modern glass container plants to increase production, while at the same time manufacturing cleaner, more environmentally friendly glass. His openness to work with suppliers in developing and, all importantly, testing new technology in real time glass production is one of the reasons why he is so well respected within the glass industry.
His vision not only to improve his own glass production plants through new technologies but also to share these developments through his commitment to IPGR (International Partners in Glass Research), of which he has been Chairman for many years and still holds the position of Vice Chairman, makes Oliver Wiegand a driver and a leader for the whole Container Glass Industry. He is representing the German glass industry at the board of the FEVE (The European Glass Container Federation). In BV Glas (The Bundesverband Glasindustrie) he is vice president and Chariman of the Fachgruppe Behälterglas (container glass trade section).
The Phoenix Committee also recognised Oliver’s personal commitment to driving forward glass recycling, a sector that is so important, not only to drive down the costs of new glass containers but to protect the World’s limited natural resources and make glass a greener, more environmentally friendly, market leading packaging material.
Under Oliver Wiegand’s joint leadership, Wiegand-Glas has become a world leader in glass recycling. The Wiegand-Glas Group now operates two recycling facilities in Germany; the first was installed way back in the early 70s and every Wiegand-Glas container now contains between 80% and 95% of cullet generated in their own facilities. Oliver Wiegand’s forward thinking attitude to both Glass Production, Research and Development into New Technologies and his world leading drive on Glass Recycling make him an ‘Individual who has made an outstanding contribution to the Glass Industry’ and a worthy winner of the 2018 Glass Person of the year.