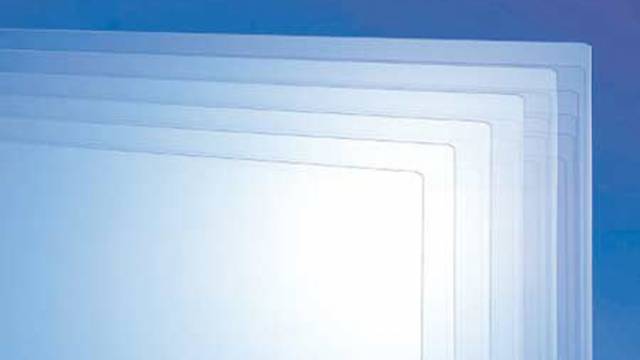 The use of organic light-emitting diodes (OLED) in several new special fields of application is under investigation by a consortium of eleven project partners within the project “So-Light“ (funded by the Federal Ministry of Education and Research BMBF). Now, the first examples are available and will make their debut at the Fraunhofer COMEDD booth at the Plastic Electronics 2012 show in Dresden, Germany, between October 9th, 2012 through the 11th. The project partner BMG Gesellschaft für Moderne Informationssysteme (BMG MIS) is a manufacturer of large area display systems. There is great interest in display systems with minimum installation depth. Since OLEDs can be evaporated on so-called ultra-thin glass, they offer a high potential for backlight illumination for LCD-based systems. Now the availability of large area and homogeneously emitting OLEDs enables ultra-thin LCD OLED compounds as basis for modular installations of large area LCD display systems.
In contrast to conventional backlight illumination, reflector and fiber optic components will no longer be required for those modular systems simplifying the design.

Dr. Thomas Bitter, spokesman from BMG MIS said, “With these new OLED backlighting systems, users have the opportunity to modernize existing LCD displays easily and inexpensively, in applications such as transport destination displays. Compared with previous backlight methods, our new OLED backlight increases overall luminosity by 50% and also increases the lifespan beyond 100,000 hours As a result, by upgrading and maintaining regular maintenance of such displays will remove the need for unnecessary modernization measures, as well as creating a new visual display.” The Fraunhofer COMEDD developed and manufactured OLEDs for those displays together with BMMG MIS. The first technology demonstrator, which shows the principle of the LCD-backlight illumination, will first be publicly presented at the Plastic Electronics Show 2012 .

The demonstrator is backlit by three tiled OLED-modules with the dimensions of 300 mm x 100 mm each. Due to the thin installation depth of 30 mm, it achieves a pixel brightness of 350 cd/m2, which is sufficient for indoor applications.
In the long term, further development of current OLED area light sources to a single, coherent and maximized area offers potential for installation depths of less than 10 mm. These display systems can be used in passenger information systems in public transportation and central building control systems.