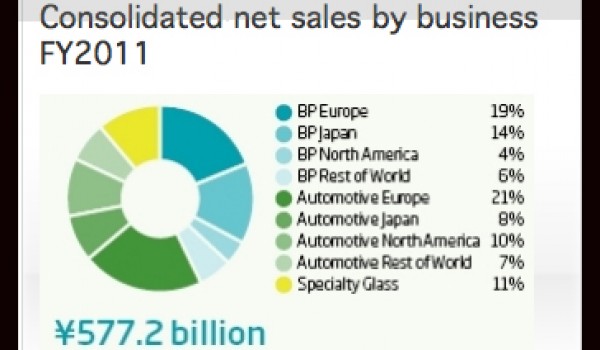 Nippon Sheet Glass (NSG) has released its second quarter financial result for 2011, with underlying profitability improved due to increased volumes, particularly of value-added products, in the building products (BP) business.

Nippon Sheet Glass (NSG) has released its second quarter financial results. In the building products (BP) business, underlying profitability improved due to increased volumes, particularly of value-added products. However, the cumulative result represented a reduction in profit compared to the previous year. The company’s solar energy product volumes continue to grow, even if at a lower rate than in previous periods.
In North America, representing 9% of BP sales, cumulative local currency revenues and profits were higher than the previous year, with an improving product mix.
In Europe, representing 43% of the group’s cumulative BP sales, revenues were similar to the previous year. Profits increased, mainly due to cost savings. Sales prices were stable during the quarter, and, relative to the previous year, continue to offset the increase in input costs.
Revenues in Japan, representing 33% of BP sales, were slightly higher than the previous year.
Downstream revenues and volumes increased, while profits increased strongly, with an improving mix of higher value-added products, and increased downstream volumes.
In the rest of the world, revenues improved, while underlying profits, excluding the effect of the previous year gain on settlement of an insurance claim in Chile, dropped. Results in South America were strong, with some volume growth experienced. Revenues and profits in South East Asia and China however, decreased, with over-capacity in China contributing to a weak pricing environment.
During the second quarter, the BP business achieved sales of USD 1,644 million (JPY 128,440 million) and an operating profit of approximately USD 103 million.