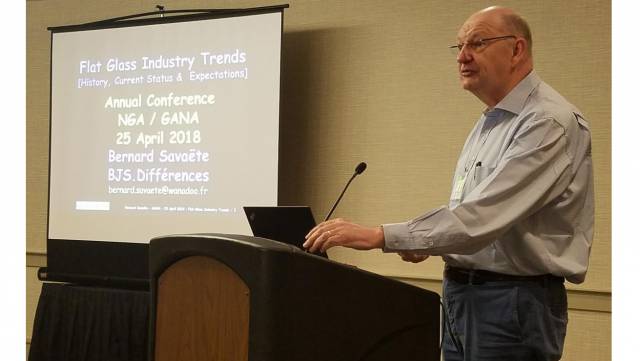 Bernard Savaëte delivering his keynote address during the NGA conference

During the recently-held NGA conference, global flat glass industry expert Bernard Savaëte gave a keynote address on the evolution of the industry.

The global glass industry has witnessed tremendous shifts in the last 25 years, with more changes on the horizon, according to Bernard Savaëte, a global flat glass industry expert and founder of BJS.Différences. Savaëte delivered a keynote address during the Annual Conference for the now-combined National Glass Association and Glass Association of North America in Napa, California.
Savaëte began with the evolution of the float glass industry in the last 25 years. “In 1992, there were 150 float lines operating, mainly in the Western world; today there are more than 500. In 1992, China had just 25 lines; today, it has more than 300 lines that are built, and 250 lines that are running,” said Savaëte. “Twenty-five years ago, 60% of float glass production came from the [European Union], the United States and Japan. Today, less than 20% of production comes from those places.”
Savaëte also discussed the new players that have emerged in the float industry. In 1992, the global industry had four dominant companies: Asahi Glass Co., Pilkington, PPG and Saint-Gobain. Two of those companies no longer exist in the glass business in the form they once did – Pilkington was acquired by Nippon Sheet Glass and PPG sold its glass business to Vitro Architectural Glass. And the list of dominant global players has grown to include Guardian Glass, Fuyao, Kibing Group, Sisecam, Xinyi Glass Holdings Ltd. and others.
The fabrication market has also experienced notable shifts, with fabricators taking a larger role in the industry, Savaëte said. “In 1992, the producers were dominant. Several fabricators wished to become glass producers. Today, you don’t see that,” he said. “Today, the downstream business is more crucial than before. It is defining the expectations and the design, and sometimes dictating sizes, performance and functionalities. … Additionally, while all fabricators were local in the past, some are becoming regional and even global.”
Looking ahead, Savaëte said he sees continued evolution on the horizon, and industry representatives should keep a close eye on the movements of the industry to ensure they aren’t left behind. Savaëte quoted President John F. Kennedy in saying, “Change is the law of life. And those who look only to the past or present are certain to miss the future.”
In terms of global industry trends, Savaëte said he expects to see more consolidation and restructuring with new companies becoming bigger players in the flat glass industry. He also anticipates that China will reduce its number of lines, due to its overbuilt float capacity, and that more Chinese float producers will develop their businesses outside of China. Additionally, India, Southeast Asia and Africa will continue to become key development markets for the industry.
In terms of products, Savaëte forecasts continued performance improvements of glass, with low-emissivity insulating glass units becoming the norm. Products will also continue to get bigger, thinner and more complex, and durability will improve. Savaëte said he also expects to see a low price switchable glass product and anticipates an increased focus on occupant comfort.