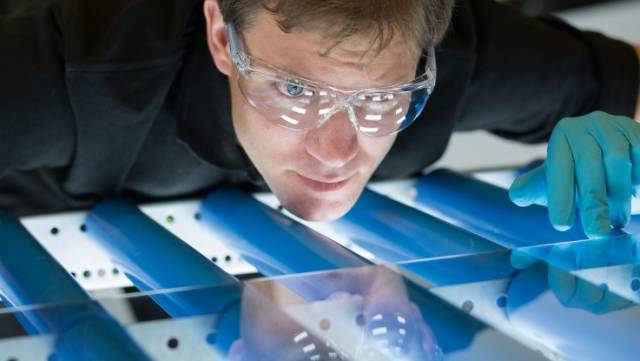 Merck has announced that it will be establishing a production unit for liquid crystal window modules.

The volume of the investment is around € 15 million; the location will be decided in the coming weeks. The manufacture of the switchable glass modules is scheduled to begin at the end of 2017.  The investment in liquid crystal window technology is an important step as part of the company’s LC 2021 strategic initiative. With this, Merck is pursuing the goal of leveraging its market and technology leadership in liquid crystals beyond their use in displays. In June 2014, Merck acquired Peer+, a Dutch specialist for liquid crystal window technology, with which it had been collaborating closely since 2011.  Switchable liquid crystal windows (LCW) can currently achieve two effects: They darken the glass to provide sun protection or they make the glass opaque to provide privacy. They are primarily used in architecture; automotive applications are being developed. To achieve faster market penetration of the new technology, Merck has now additionally set up an independent business field for liquid crystal window technology. Like the liquid crystals business, it is part of the Display Materials business unit within Performance Materials.
“We see this as a major opportunity to shape the market for liquid crystals in windows. Yet it does not mean that we will be competing with glass and window manufacturers. The LCW modules that we will be manufacturing are in a sense precursor products. Our customers can process them to make smart windows and glass façades,” states Walter Galinat, Member of the Executive Board of Merck and CEO of Performance Materials.
There are already first pilot applications for liquid crystal windows: The window façade on the west side of Merck’s modular Innovation Center in Darmstadt has been fitted with the new LC windows for over one year now and is being received very positively. The new OLED production building currently being constructed at the Darmstadt site has also been fitted with LC windows that already provide improved energy and light management.
Transparent and color-neutral shading– automatic or at the touch of a button In order to protect against solar radiation, liquid crystal windows allow continuously variable switching from dark to light and vice versa in just seconds, which can be controlled either automatically or manually. Compared with competitive technologies, the materials offered under the licrivision brand name have high color neutrality. The desired color can be customized to suit the setting. In addition, they remain crystal-clear even at a slanted viewing angle. Therefore, smart windows in buildings offer architects the possibility to use a lot of glass and create transparent spatial concepts. At the same time, they contribute significantly to a sustainable building climate control system. Initial measurements have shown energy savings of up to 40%. Light transmission can be varied in a range of up to 70% in the light switching state and at least 5% in the dark switching state. Long-term tests prove the longevity of the materials. They operate perfectly, from the icy cold of a winter’s night to the afternoon heat of a midsummer’s day. They are just as easy to integrate in façades and to clean as conventional windows. For privacy control, the windows allow switching from transparent to opaque, which is suitable for use such as in conference rooms within public buildings or bedrooms in the home environment.