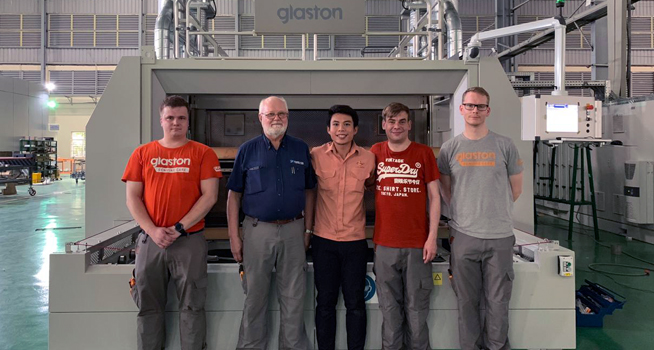 “The market in Vietnam for cars is very large with lots of room for growth. People are becoming wealthier, and sitting in a car is more comfortable than being on a scooter, which may be prohibited in the next few years,” said Nguyen Phuong Tran, Production Manager, and son of Long Nhien Automotive Glass’s owners, about his home market. “The Glaston Matrix windshield bending furnace is a stepping stone for us to tap into this rapidly expanding business of hundreds of thousands new cars per year.”

Business for the family did not always have such a positive view to the future. Tran’s father always had a passion for windshields, but that market was highly competitive. He recognized, however, that no one was tempering glass in Vietnam at the time. So, in 2001, he established his company by bringing back some old tempering machinery from Australia fixing it up. “It wasn’t until 2014 that my parents bought their first laminating line from China when the market started to grow and demand expanded. It was a bending furnace, primarily used for bus windshields.”

“My whole life, I had no knowledge about glass,” Tran explained. “When I searched on YouTube, Glaston popped up. Others already knew Glaston was the best in the world. After watching the video on YouTube countless times, I felt it was the most beautiful furnace I’d ever seen. It looked so cool! Since we were aiming to move into passenger cars, Glaston Matrix was the only choice.”

About a year ago, the company contacted Glaston and signed the agreement for a Matrix windshield bending furnace. The new Matrix was installed and commissioned in only 2.5 weeks in mid- May 2019. “I had never installed a machine before,” Tran said. “But my parents and everyone in the factory were really impressed. Of the 10 machines we have at our factory, this was by far the quickest one ever.

“Yes, the Matrix YouTube video showed the windshields coming out of production quickly – but this was much faster than I expected in reality,” Tran added.