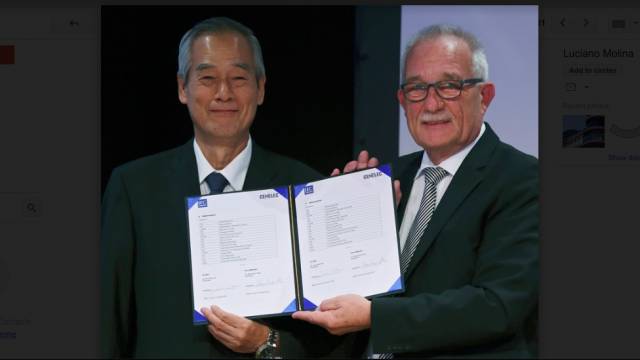 Friday, during the annual IEC General Meeting in Frankfurt, the IEC, which publishes the large majority of International Standards for electrical and electronic devices and systems, and CENELEC, its counterpart at the European level, have signed an agreement that will increase the harmonization between International and European standards. This agreement will benefit the European electrical and electronic industry, which will find it easier to export to markets around the world, many of which rely on IEC International Standards, as well as manufacturers from other countries who will be able to export assemblies and products more easily into the European market.
Today, electrical and electronic devices are the largest category of goods traded in the world. In 2015, they represented 17.7% of total trade value, according to UN Com trade statistics. This is without counting goods such as lighting, photographic devices, aircraft and trains, which are not included in these numbers.
Europe is an important consumer of electrical and electronic devices and systems and is host to thousands of small, medium and large companies active in this field. Many of them want to sell beyond national and European borders.
Around 80% of all European electrotechnical standards are identical to or based on IEC International Standards.
This level was achieved through the Dresden Agreement which was signed in 1996 between both organizations. However, a lot has changed since then – global trade in electrical and electronic devices has accelerated and differences between products have become a lot smaller.
The new Frankfurt Agreement takes these changes into account, and aims to bring the ratio of harmonization between International and European standards up to an even higher level.
Says Frans Vreeswijk, IEC General Secretary & CEO: “Most countries in the world accept products that are built to IEC International Standards. This harmonization facilitates global trade and it allows developed and developing countries to compete on an equal footing, levelling the playing field.  This agreement, with CENELEC, an important IEC partner, will further boost the efficiency of both organizations, making best use of resources and ultimately help make the world a safer place.”
Says Bernhard Thies, President of CENELEC: “An electron is an electron, in Europe, Asia, the US or Africa. There is really no good reason to have a different standard from one region to the next. Differences waste time and money and make it more difficult for European manufacturers to export and compete globally. This agreement is an important path forward in harmonizing European standards with the world and increasing European industry competitiveness on the global market.”
Under the Frankfurt Agreement, the primacy of electrotechnical standardization at the international level in the IEC will be reinforced. This avoids duplication of efforts and helps make best use of European and IEC experts.