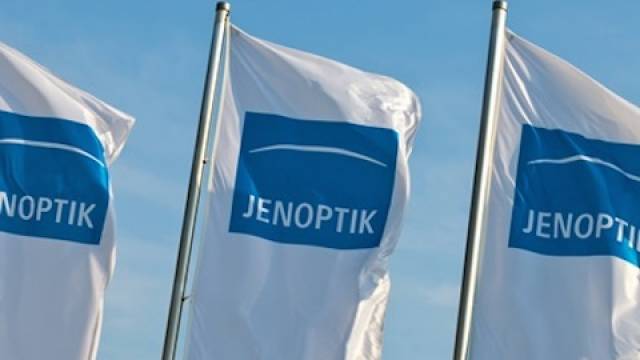 Jenoptik has seen a successful return to growth over the last year, with group revenue increasing by more than 13 percent and, at around 670 million euros, this marked a new record in the company’s recent history (prior year 590.2 million euros).

The company also achieved record figures in its operating result. According to preliminary figures, income from operations (EBIT) rose at a faster rate than revenue, by around 18 percent to around 61 million euros (prior year 51.6 million euros). The Group’s EBIT margin correspondingly improved to approximately 9.2 percent (prior year 8.7 percent) and was thus within the medium-term target corridor. EBITDA rose some 17 percent, also more strongly than revenue, to just under 90 million euros (prior year 76.1 million euros).
“After a slow start in the first half-year 2015, our business picked up well in the third and fourth quarters, allowing us to fully achieve our targets for 2015. Thanks to the successful integration of Vysionics, acquired in 2014, our ongoing internationalization process and the consistent execution of our efficiency programs, we managed to increase our operating result at an above-average rate. The good quality of results confirms that we are on the right strategic path and, in view of present business forecasts, will continue on our course of profitable growth in 2016,” says Jenoptik President & CEO Michael Mertin.
Jenoptik achieved revenue growth in all segments over the past fiscal year. Above all, the operating business was positively influenced by an upswing in investment within the automotive industry, greater demand for optoelectronic modules and project-related settlements relating to major orders in the Defense & Civil Systems segment.
In the 2015 fiscal year, the Jenoptik Group received new orders totaling more than 635 million euros. According to preliminary figures, the order intake was below the level of revenue but still higher than the prior-year figure (prior year 589.2 million euros). Initial calculations also indicated that the order backlog in the Jenoptik Group was worth more than 370 million euros at the end of 2015 (31/12/2014: 422.5 million euros). The start of work on major projects scheduled for several years in the Defense & Civil Systems segment was chiefly responsible for this decline.
The Lasers & Optical Systems segment benefited from good demand for both laser systems and optoelectronic modules. Demand from the semiconductor equipment industry also improved slightly in the third and fourth quarters, but could not fully mitigate weaker growth in the first half-year. Segment revenue rose to around 250 million euros in 2015 (prior year 231.3 million euros). EBIT came to almost 24 million euros (prior year 27.0 million euros), in part influenced by provisions made for the company’s realignment process and adaptations to the product range in the laser systems area.
The Metrology segment was influenced by the upswing in investment seen in the automotive industry. Positive effects also arose from the acquisition in the field of traffic safety. Preliminary figures indicate an increase in 2015 revenue to just under 210 million euros (prior year 185.0 million euros). EBIT developed as forecast and was particularly influenced by the persistently weak market conditions in the US and depreciation effects arising from an acquisition. At approximately 23 million euros according to preliminary figures, the operating result was at the same level as in the prior year (prior year 22.5 million euros).
2015 was the best year for the Defense & Civil Systems segment in the company’s recent history. The segment’s revenue rose exceptionally to more than 210 million euros (prior year 170.8 million euros). This increase was in part due to the good course of business in the area of energy and sensor systems and the settlement of a major order. Segment EBIT improved to around 18 million euros, thus well above the prior-year value of 2.1 million euros. Alongside international growth and a consistently market-oriented business focus, this improvement is attributable to better margins in the revenue mix and, to a small extent, the sale of a foreign minority holding.
Thanks to good cash flows and despite the payment made to the last remaining silent investor at the beginning of the year in the amount of 12.4 million euros, preliminary figures indicate that net debt fell below 50 million euros at the end of 2015 (31/12/2014: 92.1 million euros). This is one of the lowest figures since the company was founded.
“A good asset position and viable financing structure give Jenoptik sufficient room for manoeuver in terms of both future organic growth and new acquisitions,” says CFO Hans-Dieter Schumacher in summary.
“Despite an uncertain global economic environment, we remain cautiously optimistic about the prospects for 2016,” says Jenoptik CEO Michael Mertin. Based on current economic forecasts and a solid order and project pipeline, the Executive Board is anticipating moderate organic growth in revenue and earnings for 2016.
From 2016, Jenoptik will be reporting on the Optics & Life Sciences, Mobility and Defense & Civil Systems segments.
As of January 1, 2016, Jenoptik aligned its structure more closely with its target markets and global megatrends. This, in particular, concerns the Optical Systems, Lasers & Material Processing and Industrial Metrology divisions. The business units in these divisions were reorganized to better serve the global semiconductor equipment, medical technology and automotive markets.
Jenoptik CEO Michael Mertin: “This organizational change underscores the sustainable ongoing development of the Group to reflect customer requirements from our markets as well as global megatrends.”
Since the launch of a divisional structure in 2008, Jenoptik has been transformed from a technology-driven to a customer-oriented company. Over the intervening years, the Group has streamlined its product range, successfully increased its international reach and considerably boosted its financial basis.
“The preliminary figures for the 2015 fiscal year confirm that we are on course regarding the medium-term planning. This means continued profitable growth over the coming financial periods. By 2018, we aim to increase revenue to around 800 million euros – including smaller acquisitions – and achieve an average EBIT margin of around 9 to 10 percent over the market cycles. The share of revenue in our focus regions of Americas and Asia/Pacific combined will then grow to over 40 percent of group revenue,” adds Michael Mertin.