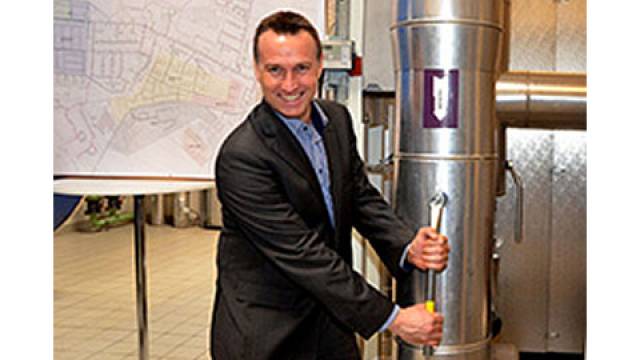 Ardagh Glass Holmegaard in Fensmark on the east of Denmark will supply heat discharged from its furnaces for residential heating thanks to an arrangement with SE Big Blue, part of Danish energy group SE.

Ardagh Group’s glassworks in Holmegaard, located in Fensmark on the east of Denmark, produces 160,000 tonnes of container glass each year, equivalent to nearly 700 million bottles and jars primarily for the beer, spirit, wine, non- alcoholic beverage and food sectors. It is the biggest company in the area, with roots that go way back in time.
Although the use of significant amounts of recycled glass (cullet) in its furnaces has reduced the amount of energy required to power the plant, the glass melting operation still generates a lot of heat that is discharged through the chimney.
For some time the company’s management, as part of its corporate social responsibility target, has been considering how to put this heat to productive secondary use through a renewable energy programme. Now, thanks to an arrangement with SE Big Blue, part of Danish energy group SE, a significant part of this heat can be captured and used to heat homes in the neighbouring district.
The surplus heat from glass production is piped from the factory to an tank, able to store 100 MWh of heat – equivalent to two days production – from where it is piped into the local district heating plant’s system and on to homes in Fensmark, on the island of Zealand. The result is reduced price heating for over 1,000 homes.
According to Ardagh’s Henrik Bonné, Plant Director at Ardagh Glass Holmegaard, this development is a ‘win-win’ for all parties: “The district will receive a secure supply of cheaper energy from one of its largest employers, a case of neighbour helping neighbours. It is good for the environment, as, against a traditional gas boiler heating process, it saves at least 3300 tonnes of CO2 a year, the equivalent of taking 400 cars off the road.
“In addition, the money we earn from the 18,000 MWh we sell, helps to offset the cost of our investment”.
“We appreciate the support from SE Blue, and look forward to working on further energy improvement projects in the future”