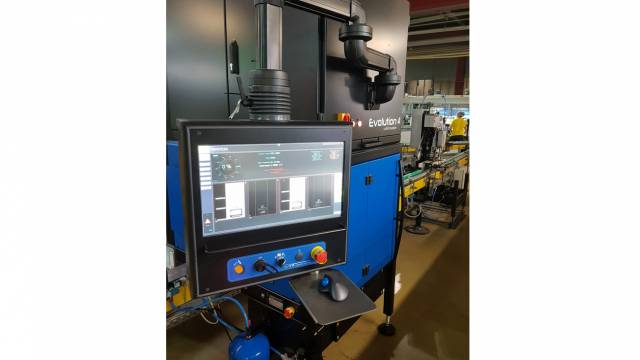 Two Evolution Ultimate 4 machines from IRIS Inspection machines have been installed on the flint cosmetics line of Heinz-Glas in Dzialdowo, Poland.

The Polish subsidiary of Heinz-Glas has taken delivery of its first non-contact inspection equipment from IRIS Inspection machines in recent weeks. Designed specifically for the inspection of perfume and cosmetics ware that requires the highest level of perfection, two Evolution Ultimate 4 machines have been installed on the flint cosmetics line in Dzialdowo. This follows the glassmaker’s acquisition of the very first Evolution Ultimate 4 design for its Klein Tettau glassworks in Bavaria, southern Germany.
Evolution Ultimate 4 is a compact version of the Evolution Ultimate non-contact inspection solution from IRIS Inspection machines, requiring an area of just one metre on the cold end conveyor, thanks to its innovative features. Both machine designs run the same software and inspection tools, in addition to which their hardware has been specially developed to limit maintenance downtime.
The machine has been designed for the inspection of sidewall defects such as stones, blisters and inclusions, as well as deformations and verticality defects, plus the detection of uneven glass distribution in the base. In addition, the Evolution Ultimate 4 machine can detect such transparent cosmetic defects as oil and lap marks, surface blisters, orange skin, tears and wash boards etc.
Although this is the first time IRIS inspection equipment has been purchased for Heinz-Glas Dzialdowo in Poland, there has been close co-operation between the parent Heinz-Glas Group and IRIS Inspection machines since 2011. One of the world’s leading manufacturers of glass flaconnage for internationally-renowned perfume and cosmetics brands, Heinz-Glas installed its first Evolution 1 inspection machine at the Piesau glassworks in central Germany. Subsequently, a diverse range of Evolution equipment has been acquired for the advanced Piesau and Klein Tettau factories in Germany, as well as for the Heinz-Glas site in Lima, Peru. This includes combinations of Evolution 1 for standalone finish inspection, Evolution 5 (base, finish and base stress inspection, with mould number reader), Evolution 12 (sidewall and sidewall stress inspection) and Evolution Ultimate machines for the detection of transparent defects in perfume and cosmetics containers.
A subsidiary of the Wisetec Group, IRIS Inspection machines was established to provide turnkey inspection solutions for mass-produced glass containers of any shape or colour, including wine, beer, liquor and Champagne bottles, pharmaceuticals and food containers.