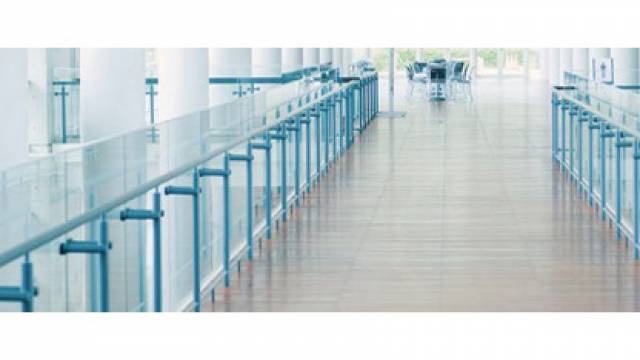 Guardian Industries’ research team have developed DiamondGuard®, a high endurance glass which is more durable and looks like new longer than ordinary glass. DiamondGuard’s patented diamond-like carbon coating is encouraging architects or furniture manufacturers to use glass for applications that were previously reserved for other materials. Available in Europe in annealed and temperable versions, DiamondGuard meets the requirements of the various European Building Regulations and Standards for safety glass, making it suitable for public use.
With its low coefficient of friction, DiamondGuard allows the glass to retain its like-new appearance longer than ordinary glass even in high-traffic environments. Laboratory tests have shown DiamondGuard’s surface to have exceptional resistance to abrasion after thousands of contacts with ordinary items when compared with regular glass.
This translates to longer lifecycles and long-lasting beauty but also to a greater flexibility in how the glass can be used. Beyond traditional applications such as counter tops, tables and mirrors, DiamondGuard is suitable for demanding applications including trade show displays, staircases and railings, elevators and wall partitions. This versatility has already won over such customers as the MGM Grand Casino in Las Vegas and the Empire State Building in New York, two examples of challenging high traffic environments. “Before DiamondGuard, we were replacing some mirrors every 6 to 8 weeks, and now the lifetime of those mirrors is over 6 months,” said Robert Hadley, Treasure Island Facilities manager, Las Vegas.
DiamondGuard’s versatility also extends to its ability to be customized with other Guardian InGlass® solutions to enhance aesthetics or performance. It is available with lacquered DecoCristal® finish with the same colour choice as any other of the InGlass range. It is also compatible with acid etched SatinDeco® finish (DiamondGuard coating on the opposite side) and copper free UltraMirror®. For even more customization or soundproofing purposes, it can be laminated and further processed to exact customer specifications.
Guardian Industries Science & Technology Center developed DiamondGuard, leveraging a patented Russian space travel ion beam technology and the physical properties of nanoscopic carbon structures. The DiamondGuard layer consists of carbon atoms that are merged with the glass’s surface through a vacuum deposition coater. This unique production process, developed by Guardian, creates a nanoscopic carbon layer with a very low coefficient of friction that gives the glass increased resistance to normal wear.
“Thanks to DiamondGuard, architects and furniture manufacturers will see their creative possibilities expand and glass resellers will benefit from new sales opportunities,” explains Rolf Petrmichl, scientist at Guardian STC. “From what was originally developed as a Russian aerospace technology, we have created a coating, structurally similar to diamond, that paves the way for unprecedented glass applications and further cements glass as an all-around, sophisticated material for interior design that can meet any need, request or taste. It has been challenging to develop a temperable version but now, DiamondGuard is even more versatile and will take glass where no other glass has gone before.”