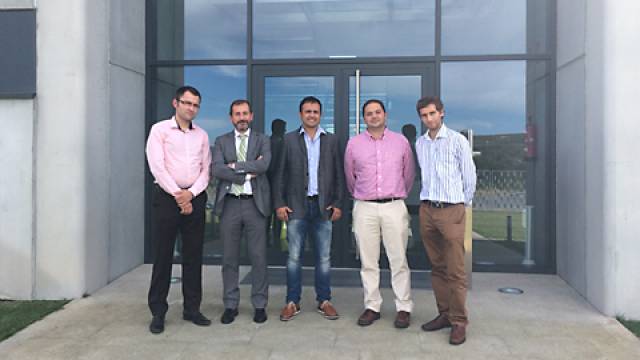 Technical group from Glassolutions-SGG visited the new production facilities of Evalam to evaluate the production systems.

In September, a technical group from Glassolutions-SGG made a visit to the new production facilities of Evalam in Europe, to evaluate the new production systems and to check the high standards of quality control of the new factory.
The assistants were Mr. Jerzy Ulbrich, Purchasing Director from Glassolutions Poland, Mr. Pierre Willieme, Engineer Responsible of Development at Glassolutions France and Mr. Tomasz Werbicki, Production Director at Glassolutions Poland. They were accompanied by the Commercial Director of Hornos Pujol, Mr. Joaquin Pujol, the Evalam Production Manager, Mr. Jose María González and Mr. Juan Diego Lavandera, General Manager of Evalam facilities.
This meeting endorses the framework agreement already existing between both companies to homologate the new Evalam Visual as the priority interlayer film for the production of Privalite & Dec-Tech Lam from Glassolutions in substitution of the already known Evalam 80/120 and Evalam Massive.
Evalam films are produced in a large and modern facility situated in Europe. There they make and distribute the different formats and references of the EVA based film (Etil-Vinyl-Acetate). They are chemically processed through an innovative method that ensures all the unique characteristics of Evalam products. Its laboratory is equipped with cutting edge technologies which allow fulfilling the highest quality standards and also keeping up with an intense R&D program to be at the forefront of the EVA laminating market.