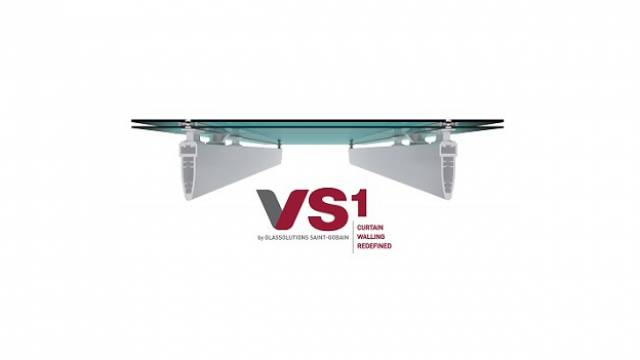 Glassolutions has launched a new type of curtain walling system in the UK and Europe, which has already proved itself on a number of high profile projects in the US. The mullion-only system to which glazing is typically attached gives the impression of a ‘floating’ glazed façade.

The first new type of curtain walling system in over a decade has been launched in the UK and Europe by Glassolutions.
The VS-1 system, which has already proved itself on a number of high profile projects in the US, is a mullion-only system to which glazing is typically attached using toggle clamps and supported by gravity brackets – this gives the impression of a ‘floating’ glazed façade enabling unbroken vertical spans of up to 14m in height.
Speaking at a recent customer launch event held at the Saint-Gobain Innovation Centre in central London, Glassolutions Contracting business manager Andy Woods said: “The introduction of VS-1 represents the most significant new development in façade systems in this country for at least a decade. Until now, creating glazed facades with large unbroken vertical spans or complex designs has often required costly bespoke solutions, which come with the headache of protracted lead times.
“But with VS-1, the beauty is in its simplicity and complex designs are more deliverable than ever before. Architects and façade engineers need no longer have to compromise on the original design vision in order to meet project budgets and timescales.”
VS-1’s innovative aluminium mullion design and highly engineered components deliver superb structural strength, with the stylised aerofoil shape of the mullion adding an interesting aesthetic feature to any contemporary interior. And with no boxy transoms at floor level, using VS-1 means interior floor space can be optimised safely by owner/occupiers. The mullions can also be reversed to serve as an attractive exterior fin-shaped feature.
The system’s simple configuration ensures complex façade designs can be achieved with relative ease. Inclined mullions in any plane are possible using standard range components or with only minor alterations, and the system accommodates geometrically complex shapes in two or three planes.
This adaptability has seen VS-1 being used in a number of architecturally challenging projects stateside. These include the eye-catching Spertus Building in Chicago which features a unique façade, the surface of which is constantly tilting in three dimensions resulting in individual units of glass that are parallelograms rather than rectangles. Such delineation and engineering of a glass façade with this complexity would have been difficult to achieve without VS-1.