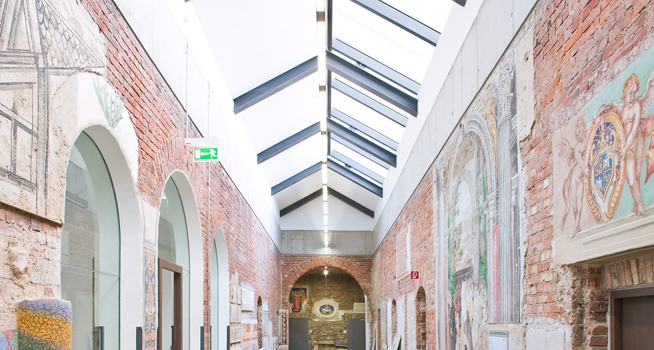 One hundred years later, the architects CODE UNIQUE, commissioned by the Free State of Saxony, seized upon the building’s history and patina, and, as part of the listed building’s fundamental overhaul, set themselves the task of uncovering the building’s original basic structure and supplementing it with functional and substantive elements. This included expanding the library, converting the auditorium into a central lecture theatre, constructing a goods lift, renovating all studios and workshops, installing numerous special laboratories and creating an enclosed restoration area with favourable climatic conditions.

The mansard roofs, elaborately designed a hundred years ago, were destroyed during the war and replaced with simple purlin roofs, which did not serve to complement the building’s aesthetic. In 2007, the decision was therefore made to raise the roofs to create an eaves joint that runs right around the building, with lighting for the studio areas as well as space for ventilation technology.

The roofs are smoothly clad with large Alucobond panels and interspersed with Okalux‘s v window areas. Effective direction-selective solar control allows work with light-sensitive materials in the art and restoration area to be carried out in daylight whilst optimising the building’s energy balance. This also has a bearing on cooling in the summer. Finally, thanks to its integrated shading system, OKASOLAR S helps to cast an atmospheric light on the patina of the spaces and the works of art contained therein.

Okalux is an independent brand within the Glas Trösch Group.