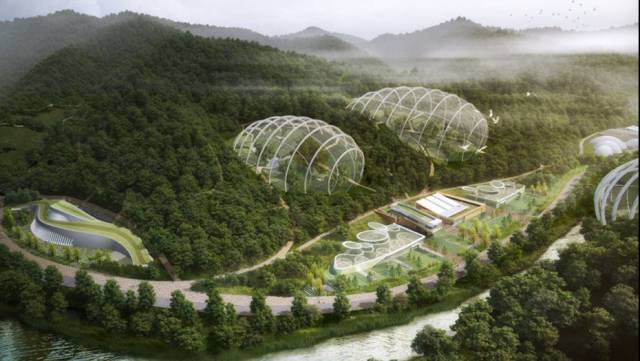 A green, tree-lined valley in Yeongyang-gun, South Korea could soon be turned from a picturesque slice of nature into a scene out of a sci-fi film, complete with giant glass domes encapsulating the landscape. Despite disrupting nature in the short term, the plan is actually a national research and conservation effort, and architect and engineering firm Samoo recently unveiled its winning designs for the project, the National Research Center for Endangered Species, to be built there.

Most eye catching are the giant glass biodomes that will be build along the hillside. According to FastCo Exist, these closed-off ecosystems will be used to breed and raise endangered birds before releasing them back into the wild. The domes’ looming height is apparently a necessity to allow the birds to adapt. Another group of buildings will reportedly focus on breeding and studying other endangered species, including certain fish, frogs, tortoises, foxes, and deer.

Beyond that, World Architecture News reports that there will be two additional regions of the center. One will hold a visitor’s center and administrative offices, and the other will have guesthouses for select visitors and researchers. The center will also allow for the study of rare plants.

While a design this ambitious may seem like it could never leave the concept stage, there’s good reason to believe Samoo will follow through: in collaboration with another design firm, it recently saw through the construction of another ambitious conservation project in South Korea – the snaking National Ecology Center. According to FastCo Exist, construction on the National Research Center for Endangered Species will start in December for an intended opening in 2016.