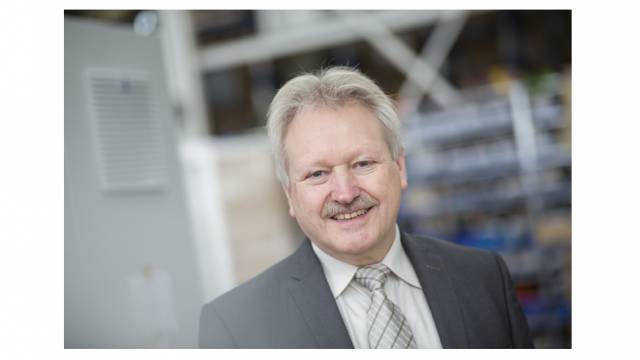 Going into retirement after about 30 years at futronic: Wolfgang Lachmann

Wolfgang Lachmann, aged 63, has been with the Tettnang control system specialist for about 30 years, initially as Technical Manager and since 2004 as Managing Director together with Michael Preuss. He will retire from active professional life on 1 February 2018.
Michael Preuss will continue as the sole Managing Director of futronic GmbH. To enable him to concentrate more on his duties leading the company in future, Preuss handed over responsibility for sales to Stephan Pies at the turn of the year. Lachmann’s successor has already taken over – Frank Ebersbach was appointed Head of Development with responsibility for all of futronic’s software and hardware development activities starting on 1 December. Preuss paid tribute to his co-Managing Director as a reliable partner on equal terms, who has “steered the company through ups and downs with considerable skill and rock-solid engineering expertise”. Wolfgang Lachmann won’t be disappearing from the scene completely, however: “There’ll always be a place in my heart for futronic and I’ll be around to support the firm as a consultant on future projects where necessary,” he promises.
Wolfgang Lachmann is what you might call an institution in the glass industry. An engineer through and through, his passion for automation solutions in container glass manufacturing has inspired him for almost 40 years. As Technical Manager and later Managing Director Development & Technology, he has driven the development of many new technologies with tireless dedication. In 2004, for example, the FMT24S became the world’s first ever control system for glass machines to feature IP technology – a real milestone. It was also under his aegis that futronic branched out into the development of automation solutions and products for customers in other industries such as bulk materials, handling & assembly and beverages. His efforts were crowned with considerable success – futronic expanded in leaps and bounds, sales boomed and the payroll grew steadily longer.
Prior to joining futronic, Wolfgang Lachmann took a degree in Electrical Engineering, specialising in Communications, at Ravensburg-Weingarten University of Applied Sciences, ten miles north of Tettnang. Originally from Bad Waldsee, he began offering “student engineering services”, as he calls them, to local firms while still at college. Some of the projects he became involved in were definitely on the bizarre side, such as the “IT component” of a device for measuring the thickness of cigarette paper, which Lachmann developed in the late seventies on behalf of Escher Wyss. He was also the man who introduced that same company to its very first PC. It was immediately put to good use on a construction site, where it carried out efficiency calculations for a water turbine – a great innovation at the time.
Lachmann finally received an invitation from Oberland, the Bad Wurzach glass manufacturer. He was “stricken by the glass virus”, as he puts it, while taking a look around the factory and being treated to some spectacular insights into the production process. He was put in charge of technical computer applications and production automation solutions in the company’s R&D department – and soon became a preferred contact for suppliers and external service providers like futronic. The latter was acquired by Oberland in 1986 and two years later the young communication engineer transferred to the control system specialist in Tettnang as Technical Manager. When futronic’s former Managing Director retired in 2004, Wolfgang Lachmann took over the helm together with Michael Preuss. They’ve been writing the futronic success story ever since.