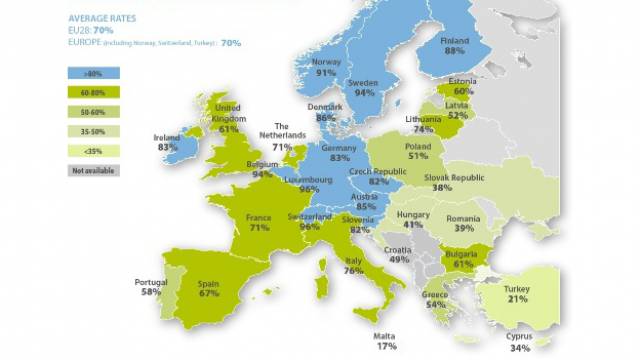 Latest glass recycling figures for the EU show also there is now far more glass recycled than ever before. Since the 1990s, recycling rates for glass have increased by a whopping 131% in Europe. Using recycled glass replaces virgin raw materials in glass production which helps decouple resource use from economic growth: a proven role model of the circular economy.

Latest industry data – published on 2 April ahead of the European Commission 2012 figures expected at the end of 2014 – confirm average glass recycling rates in the European Union have passed the 70% mark. This means that over 25 billion bottles and jars were collected throughout the European Union in 2012 to make new bottles. The savings in virgin resources could build two Egyptian pyramids.
Recycling means that less virgin materials are needed despite market growth. Between 1990 and 2012, EU consumption of products packed in glass increased by 39% in Europe. Glass recycling increased at the much quicker pace of 131%. As a result there is a big reduction of raw materials, CO2 and energy used to produce new bottles. Available industry data show a distinct decoupling of industry growth from resource demand and environmental impacts: 189 million tons of raw materials saved; and 138 million tons of waste have not gone to landfill thanks to recycling.
“Recycling makes good sense for us,” says Stefan Jaenecke, President of FEVE, “that’s why already 40 years ago we helped to put in place glass collection schemes, to inform the public and to treat recycled glass bottles and jars as a precious resource for our industry. We did not call it at that time the circular economy but this is it!”
All participants in the container glass value chain continue to contribute to these achievements. The glass industry designs and produces containers that can be effectively recycled in a closed loop system.
“This is a concrete case of the decoupling effect that we want to build in a resource efficient Europe. It has been put in place many years ago and works very well,” says Filip Kaczmarek, Member of the European Parliament “As policy makers we need to preserve and to support such business models that enhance economic growth, produce high value goods, generate value from waste, while reducing their environmental burden,” says MEP Kaczmarek. “We need therefore to work on a legislation that acknowledges and incentivises such business models.”
More needs to be done to improve the quality of collected glass that can be effectively recycled in a circular economy, as well as to collect the remaining 30% of used glass that currently is wasted. This industry effort supports the ambitious vision of the European Commission to build a “zero waste” and “resource efficient” society.
FEVE is the association of European manufacturers of glass containers and machine-made glass tableware. The members of FEVE produce over 20 million tonnes of glass per year. The association has some 60 corporate members belonging to approximately 20 independent corporate groups. Manufacturing plants are located across 23 European States and include global blue chip and major companies working for the world’s biggest consumer brands.