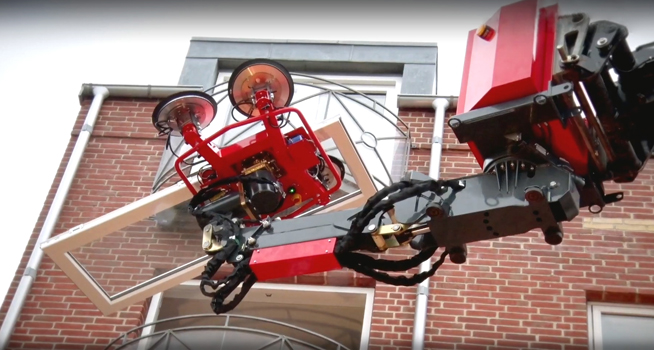 The eT-Litocran700 offers unprecedented 3D fine-tuned control for fast, low-labour installation of windows as well as glass and façade elements.

This innovation hails from the Swabian town of Rosenfeld. Here, euroTECH has harnessed its expertise in the area of vacuum technology to make life easier for the facade construction industry. The innovation consists of a combination of an extremely versatile 3D head on a telescopic arm with a vacuum lifting device. A remote control enables very exact movements in all directions. Even large window elements can be inserted in wall openings from outside down to the millimetre easily and precisely and installed for the perfect fit. This reduces personnel costs and installation time drastically, besides the fact that the eT-Litocran700 is currently considered the fastest device of its kind.

Maximum flexibility
As a stand-alone model, the eT-Litocran700 is mounted on a crane or a telescopic handler with a quick-change mechanism. Thanks to a built-in power supply with replaceable 320 Ah Lithium-ion batteries, no connections to the vehicle are required. A separate app provides information on the charge level and operating time of the battery. All that’s needed for charging is a standard 230 V power supply.

For users preferring to supply the eT-Litocran700 through the telescopic handler assembly, a variant has been developed in cooperation with Magni tailored to their vehicles. As standard, the eT-Litocran700 is equipped with an eT-Hover-univac vacuum lifting device that can suction glass panes, façade elements and stone, steel or concrete plates weighing up to 700 kg. The eT-Hover-univac vacuum lifter system can also be removed from the 3D head with a quick-change mechanism and attached to a crane, for instance.

As a stand-alone unit, it acts as a lifting device working in the tightest of spaces in the building area regardless of the height. The arrangement of suction cup elements can vary in many different ways.

Intuitive control
Both the eT-Litocran700 and the eT-Hover-univac vacuum system are operated via a remote control. With a range of 100 m, the wireless devices are intuitive to use. They allow for calm, controlled and very precise movements of the eT-Litocran700.

Minimum personnel
The 3D head of the eT-Litocran700 enables all conceivable suction system positions. Telescoping by 400 mm, the arm can also be pivoted and rotated by 180 degrees. This enables windows to be installed at an angle of 90 degrees to the telescopic handler without having to move it. At building areas, there isn’t always enough space for optimally placing inbound material. The eT-Litocran700 compensates for this with its range of motion. Out of reach until now, glass panes located on an a rack on the side facing away from the construction can be easily retrieved.

Even complicated overhead manoeuvres and overcoming obstacles such as balcony rails are no problem at all. Its 400 mm telescopic arm accurately places every element down to the last millimetre. In this way, two installers can install an entire façade effortlessly. The eT-Litocran700 does away with tedious handling with a risk of breakage, offering maximum flexibility in outdoor applications with minimum personnel requirements.

Available in the near term
The comprehensive testing phase of the eT-Litocran700 is now completed. Test sales in Denmark went very well. In Germany, the device is now also available in larger quantities. The YouTube video provides a visual impression of how the eT-Litocran700 works in use. euroTECH is currently offering an attractive range for machine rental companies in the DACH region looking to add the eT-Litocran700 to their machine park. For façade designers already looking to use the new devices now, euroTECH carries its own rental stock. The eT-Litocran700’s high efficiency also makes it a worthwhile purchase.