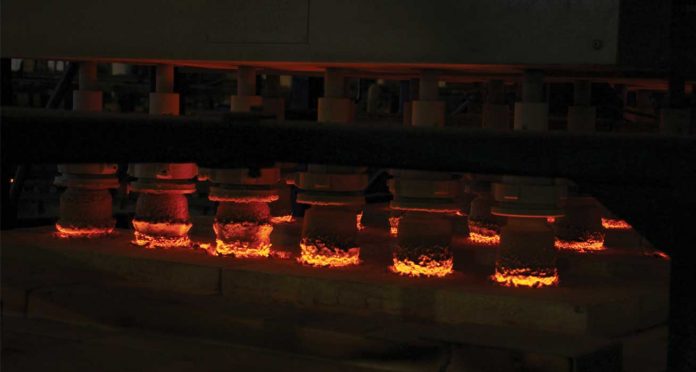 In its mission to supply a single solution, offering container glass manufacturing, filling and logistics, Encirc is investing not only in cutting-edge technology to increase production, but also to ensure the health and safety of its workers and our environment. 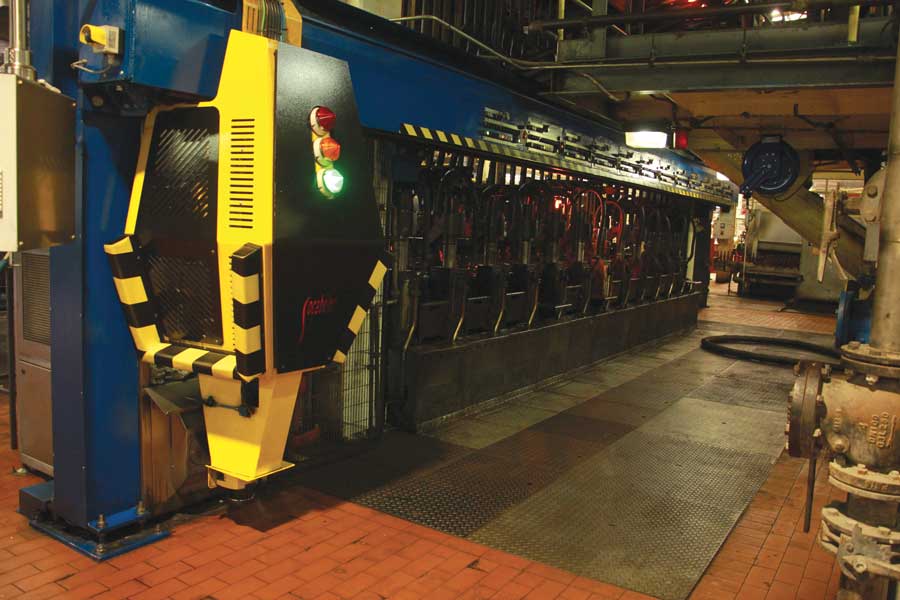 Over the last five years, glass container manufacturer and beverage filling provider, Encirc, has grown to become a unique player within the European packaging market. The company is a leading champion of sustainable manufacturing, and is vocal about the role that manufacturers must play in the fight against climate change.
The company’s long-term aspiration is to become the world’s most sustainable manufacturer and it’s already had some fantastic success in meeting this ambition.
From production to logistics, Encirc has invested – and continues to invest – in a variety of innovative initiatives focused intently on these aims, as well as with a keen eye on maintaining its place at the cutting-edge of the glass industry.
Indeed, parent company Vidrala Group is investing a total of EUR 500 million across its plants in Europe, with more than GBP 140 million of that being invested in Encirc’s two UK-based plants (Elton, Cheshire and Derrylin, County Fermanagh).

FIRING UP SUSTAINABILITY
The furnaces Encirc operates in both Northern Ireland and Elton are the beating heart of its operation. The company’s overall carbon emission levels and energy usage depend massively on their operational efficiency.
Container glass furnaces typically have a life span of approximately 12-15 years, and Encirc’s four-year plan – with Vidrala’s investment – involves rebuilding all four furnaces in these two sites.
As part of these modifications, the furnaces in Northern Ireland are being rebuilt to accept natural gas, which will be piped to Derrylin through the GBP 250 million Gas to the West initiative.
Extending Britain’s natural gas network into the west of Northern Ireland, Gas to the West has been championed by Encirc since it was first conceived and will provide a direct, reliable and a constant supply of natural gas to the Derrylin site.
The new furnaces are securing Encirc’s container glass making capabilities in Elton and Derrylin until 2030 and beyond, while also significantly improving the company’s operational and energy efficiency.
In Elton, Encirc’s record-breaking new furnace was opened in 2018 by the Secretary of State for Business, Energy and Industrial Strategy, The Rt Hon Greg Clark MP. The industrial oven is now one of the largest glass container furnaces in the world and was built in record time.
Its enhanced power means Encirc have been able to significantly increase the melting capacity at its Elton site, while reducing the amount of CO2 produced by each container it makes. 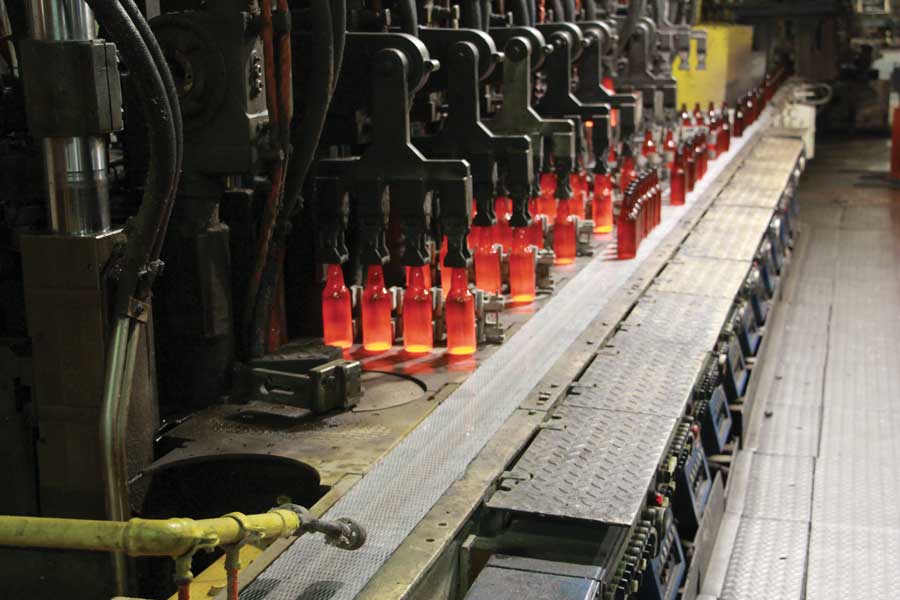 EMBRACING INDUSTRY 4.0
The ‘fourth industrial revolution’ is a theme that will dominate the agenda for the next decade. Encirc has long had a focus on embracing Industry 4.0 processes. The company is now at the forefront of its sector, with smart technology playing a fundamental role across its plants.
Encirc’s Elton plant was purpose-built with Industry 4.0 and sustainability in mind. The 52,000-square metre warehouse in Cheshire – the largest of its kind in Europe – is completely automated and able to store, arrange and move thousands of tonnes of product annually.
Now, Encirc is set to significantly boost glass production capacity at its Eton site by building a world-first ‘Industry 4.0-Ready’ glass production line. The new line will have cutting edge technology installed and will see the plant’s hot end (where bottles are produced) digitally connected to the cold end (where bottles are inspected).
Once operational in Q2 2020, the new line will make use of in-built intelligent swabbing, laser identification marking and state-of-the-art inspection machines, which will be fully integrated to work alongside human operators.
The state-of-the-art technology will significantly improve health and safety for operators while also increasing the plant’s manufacturing capabilities. With closed loop technology linking the hot end to the cold end, via instant digital information, the line’s efficiency will be unparalleled within the industry.
This particular project will include the rebuilding of one of Elton’s two furnaces. The new furnace’s increased melting capacity will supply the new production line with glass, significantly increasing the plant’s bottle production output.
This activity, which also includes a significant investment in emissions reduction and abatement, comes as part of Encirc’s commitment to continuous improvement and reduction of the carbon footprint of its supply chain.
It is also at a time where demand for glass in the UK market is strong, boosted by changes in how imported beverages reach UK consumers with Encirc’s 360 supply model driving an increase in UK bottling.
Adrian Curry, Managing Director, Encirc, commented: “Glass is a fantastic material, with remarkable sustainability benefits. As more people begin to acknowledge this and choose glass packaging, there is, of course, an enormous pressure on the UK’s glass sector to respond and supply more containers. This is why Encirc and our parent company, Vidrala, are always investing in the most advanced technologies to ensure we produce more with less waste.
“Continuous improvement is what makes Encirc great. In 2018, we rebuilt a record-breaking container glass-melting furnace, one of the largest in existence. We didn’t stop there though, as from next year we’ll be the first glass manufacturer in the world to take advantage of an ‘Industry-4.0 Ready’ production line. Not only will these new cobotic processes help us further strengthen our market position, they will also support us in safeguarding and futureproofing our current workforce.” 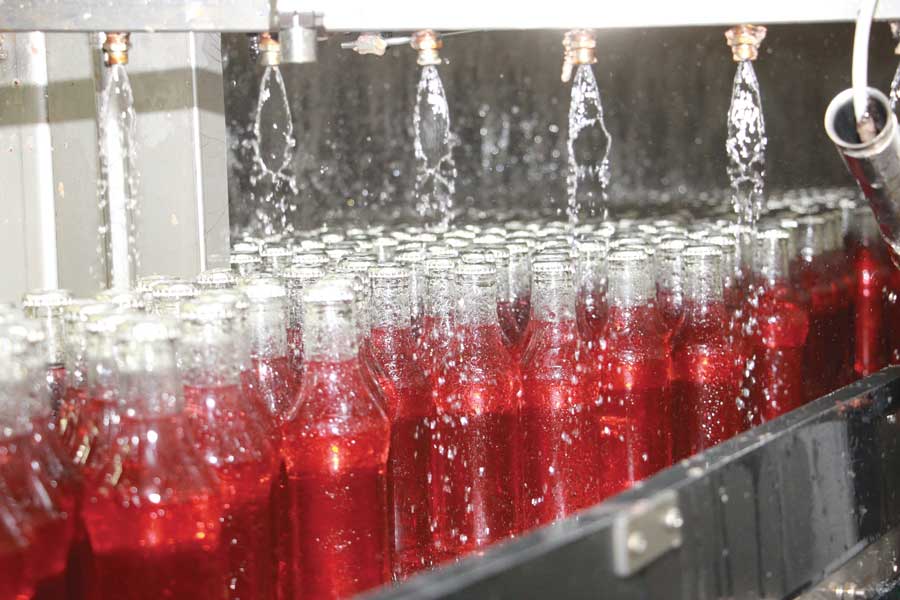 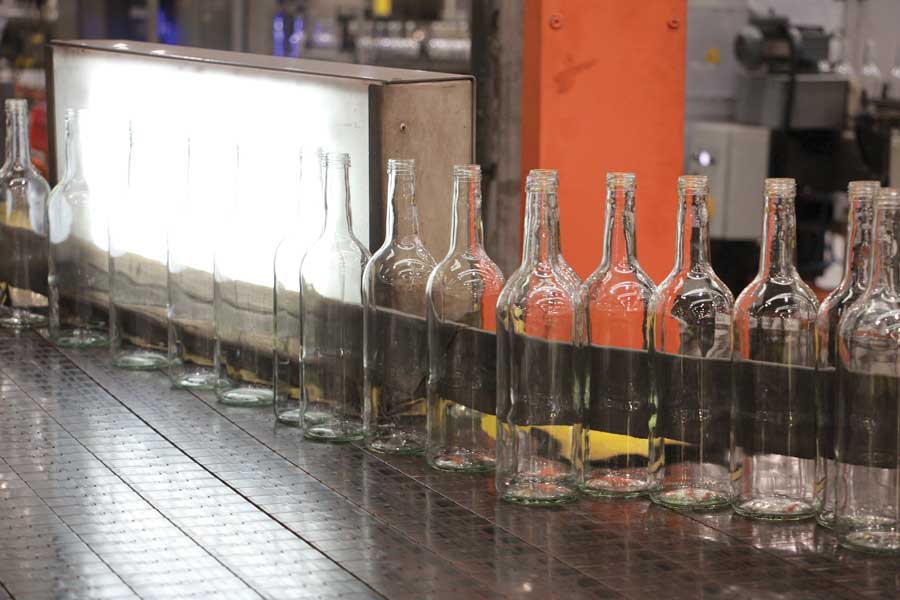 ELTON RAILHEAD
In another investment in a more sustainable, efficient future, Encirc has also recently brought an on-site railhead terminus back to life at its Elton plant.
The track links the 200-acre site with the adjacent Helsby line, and was designed to utilise the former route of an original rail terminal, built for a power station which occupied the site in the 1950s. Now, the route transports raw materials and cullet directly to the Encirc plant, allowing the company to significantly boost its sustainability credentials.
While often considered a more traditional form of haulage, the new rail capabilities allow Encirc to reduce the environmental impact of the glass containers it produces.
Where once all of materials were delivered to the site via road, the new terminal will see 97 per cent of sand and 65 per cent of the recycled glass cullet brought to the plant by rail. This is estimated to reduce Encirc’s reliance on fuel-heavy HGVs by an estimated 6,500 journeys per annum – cutting almost two million road miles from our highways.
Being able to transport higher volumes of recyclable glass cullet also means Encirc will significantly reduce its emissions during the manufacturing process. For every 10 per cent of cullet that Encirc uses to replace raw materials, it can reduce energy usage by around three per cent. 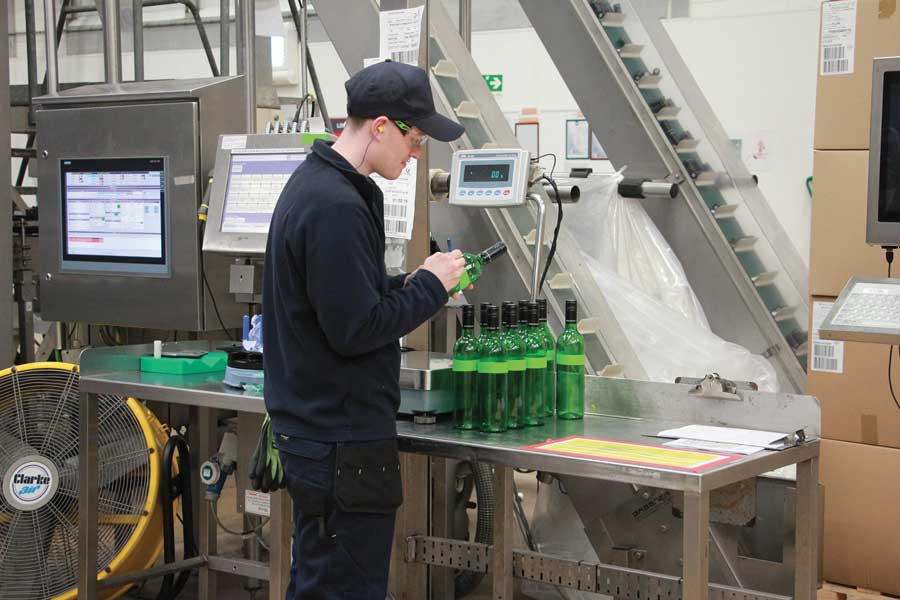 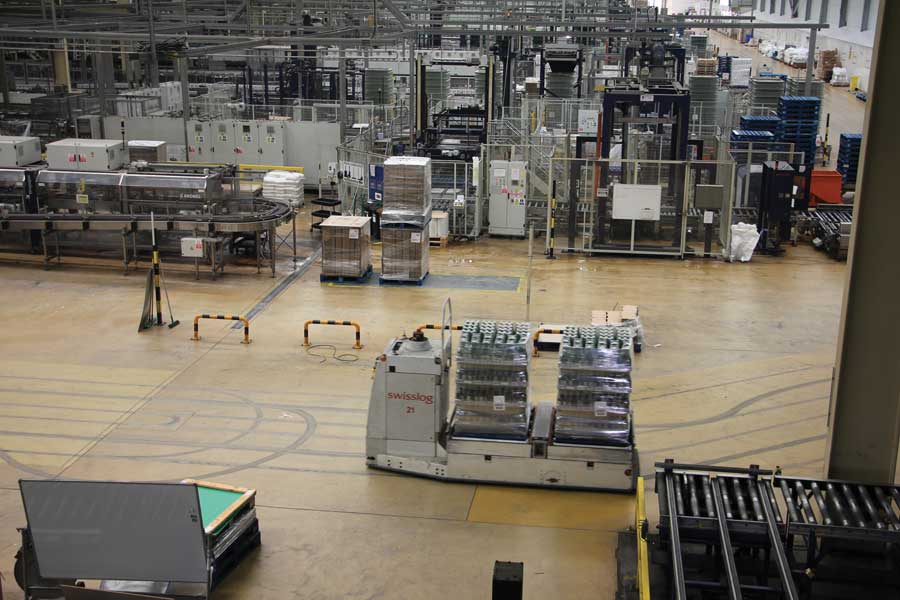