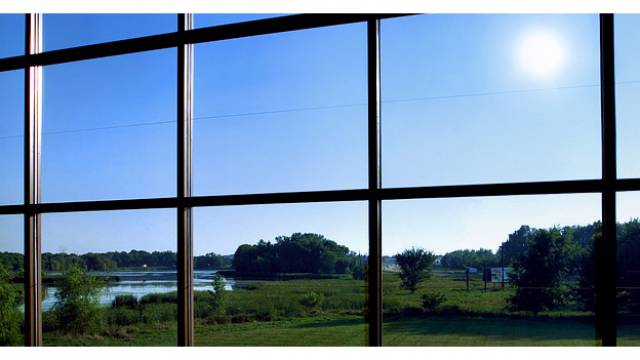 NanoMarkets has released the “Electrochromic Glass and Film Markets – 2014-2021” in which it states that this market is expected to reach USD 2.2 billion in revenue by 2020, growing to over USD 3 billion by 2022.

ccording to “Electrochromic Glass and Film Markets – 2014-2021” a new report from industry analyst firm NanoMarkets, the market for electrochromic (EC) glass will reach USD 2.2 billion in revenue by 2020, growing to over USD 3 billion by 2022.
While the biggest opportunity for EC glass will be found in smart windows, new applications such as shutters for smartphone cameras or electrochromic displays may emerge for EC glass over the next decade. The EC glass sector has attracted investment from giant multinationals such as Corning, GE, Guardian Industries, Merck, PPG, Saint-Gobain, and Seagate. One EC glass firm – View – is believed to have clocked up USD 300 million in direct investment.
This report identifies and quantifies the opportunities for EC glass and film in the construction industry, automotive windows and mirrors and emerging applications. It also discusses the commercialization of novel EC materials. Eight-year forecasts are provided, with breakouts by applications in volume and value terms and with further breakouts by region/country.
This report also analyzes the product market strategies of the leading firms active in EC glass space. Firms discussed in the report include: Chromogenics, Corning, E-Chromic, EControl-Glas, Guardian Industries, GE, Gentex, Gesimat, Grupo Ficosa International, Guardian Glass, Ichikoh Industries, Magna International, Murakami Kaimeido, Merck, PPG, Sage Electrochromics, Saint-Gobain, Samvardhana Motherson Reflective, Seagate, SWITCH Materials, Tokai Rika Company and View.
NanoMarkets believes that EC glass has considerable opportunities going forward in the smart windows market. Although the market for EC smart windows are small at present – just over USD 15 million in 2015, NanoMarkets sees revenues from EC smart windows reaching more than USD 700 million by 2020.
Although other smart materials are being developed for the smart windows market, EC materials are most likely to dominate the space based on their low cost and availability. Meanwhile, Sage Electrochromics, a subsidiary of Saint-Gobain, has claimed that its new manufacturing facility will let it to reduce the cost of EC glass by as much as 70%. Currently EC glass is integrated into IGUs and sold like other windows. However, by 2016 it is expected that EC film will be available which is suitable for retrofitting existing windows, transforming them into energy efficient smart windows.”
NanoMarkets also expects new high-performance EC coatings to emerge for smart windows and other applications, although many will be variants EC materials currently used. Nickel oxide is being added to tungsten oxide for improved colour neutrality. NanoMarkets also expects the addition of ITO and other nanoparticles to EC polymers already used in smart windows in order to improve solar absorption. If, as NanoMarkets expects, Gentex enters the general-purpose smart windows space (it already sell smart windows into the aerospace sector) it would change the materials mix, since its EC mirror technology is based on viologens, which are not currently used in smart windows.
Outside of EC windows and mirrors, the report suggests that there may be a revival of EC displays for certain niche markets, such as powered credit cards. Another opportunity may be the use of EC glass devices as a replacement for conventional mechanical iris diaphragms used in smartphone cameras. These novel devices will supposedly be more reliable than the existing technology. Although EC shutters of this kind will not be available for a few years, NanoMarkets estimates their potential market is around two billion units.
NanoMarkets tracks and analyzes emerging markets in energy, electronics and other area created by developments in advanced materials.