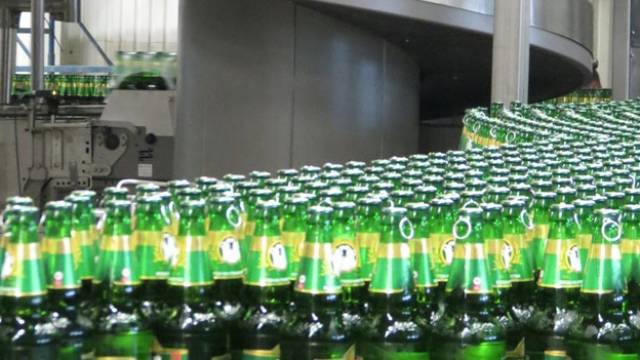 While Ukraine is seeing a decrease in the consumption of beer, one of its breweries – Efes Ukraine – is the exception, with beer sales increasing. In order to perfectly cater for the calculated increase in demand, the company is raising its production capacity by 34% and has invested in a KHS glass line which can process 60,000 0.5-liter bottles per hour.

The first six months of 2013 saw the consumption of beer in Ukraine fall, with the brewing industry having to announce a drop in sales of 4.4% – with the exception of one brewery: Efes Ukraine. Here, the sale of beer actually rose by 12.2%! According to Vasilly Basmanov, technical director of Efes Ukraine, this two-figure growth in sales is destined to continue over the next few years. In order to perfectly cater for the calculated increase in demand for Efes beers in the future, too, the company recently raised its production capacity by 34% and invested in a KHS glass line which can process 60,000 0.5-liter bottles per hour.
The turnkey line is now running in four-shift operation. KHS delivered in the space of just five months and had the line up and running after a mere four weeks of installation. The acceptance test yielded a result of 92% in efficiency. The conveyors throughout the line are frequency controlled so that they can process the many different types of Efes bottle (from the bulbous barrel bottle to the standard beer bottle) with very short changeover times. Both new and returnable glass bottles are handled on the line. An Innopal AS1H depalletizes the new glass bottles and the manually stacked pallets of soiled containers. An Innoclean SE single-end bottle washer with a Triple-i-Drive system and energy-saving bottle carriers has a caustic immersion period of 14 minutes, thus giving even extremely dirty bottles a thorough clean. The line also features an Innofill DPG-ZMS filler with a bottle sealing system for crown corks, twist-off caps or ring pull tops, an Innoket KL 2080 cold glue labeller, an Innopack Kisters TSP Advanced tray shrink packer and an Innopal PB1HS palletizer with upstream inline robot grouping.
Basmanov is delighted with KHS’ performance. “We’re extremely satisfied with our KHS turnkey line and the perfect interplay of the individual components on it. Basically, this line actively helps us to secure our future.”
Efes Ukraine has a share of around 8% on the Ukrainian beer market, placing it at number four on the list of top-selling brewery groups. The company has 13 brand beers in 42 sales units in its portfolio and supplies the economy, mainstream, premium and super premium segments.