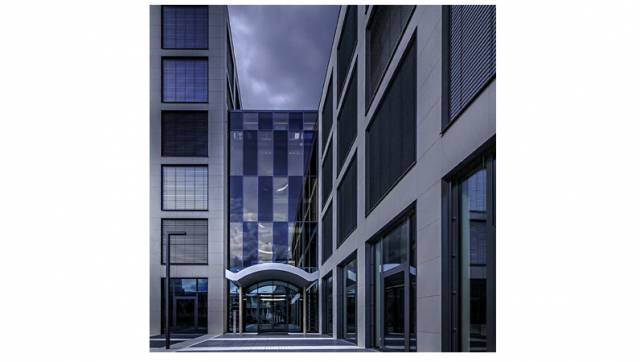 When facing the challenge of transparency and protection from heat and glare, EControl glass was chosen to create the 16-metre-high glass atrium at Lapp Group’s new headquarters.

At the new European headquarters of the Lapp Group (U.I. Lapp GmbH) in Stuttgart-Vaihingen, the open-space concept is lived right into the detail. The transparent exterior of the administration building is characterized by large window areas; the two L-shaped wings of the building are connected by a 16-metre-high glass atrium. In order to maintain the openness, Lapp decided to use the dimmable glass EControl smart 45/8 (EControl, Plauen). It offers two advantages: an unobstructed view to the outside remains guaranteed – and the intelligent glass has a positive effect on the air conditioning of the atrium.
The main challenge was to realize both the desire for transparency and protection from heat and glare in a “visible” way. Detailed product research finally led the planners from Schwarz Architects to the perfect solution – dimmable glass from the company EControl in Plauen.
In the atrium, with its 16-metre-high glass façade, 85 m² of EControl smart 45/8 provides shading within the glass, an unobstructed view in the best weather and a pleasant climate in the foyer. With their electrochromic properties, the glass panes combat overheating of the atrium whilst maintaining transparency. The solar factor (total energy transmittance) of the dimmable triple-pane insulation glass EControl 45/8 at the strongest dimming level is only 8% – which also reduces the requirement for air conditioning. Because the panes can be regulated in steps, the shading always matches the current weather conditions. When it is dull outside, the glazing allows a lot of daylight to enter the building. External shading is unnecessary with this glass.
The highly functional principle behind the glass is the internally positioned nano-structured coating. This creates the so-called “electrochromic effect”: an electrical voltage causes the glass to adopt a blue colour. “The dimming level can be controlled either automatically or manually, for example via a tablet,” says EControl Managing Director Tobias John.
The European headquarters of the Lapp Group is today regarded as exemplary in relation to the German energy saving regulations – it undercuts them by 20%. The climate-intelligent EControl glass integrates perfectly into the efficient overall structure.