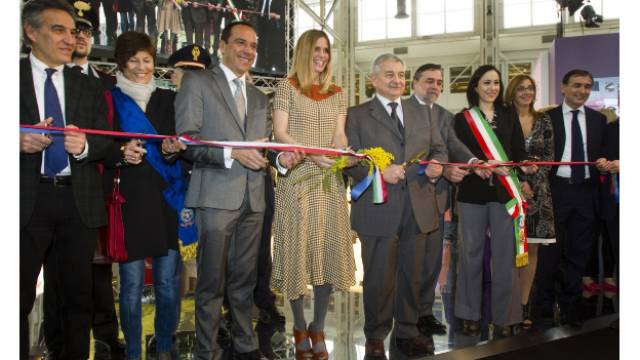 The recently-held edition of Cosmoprof, which took place in Bologna, northern Italy, 7-10 March, had 2,390 exhibitors including 1,500 international, 24 national groups with new entries from Japan, India, Indonesia, Pakistan and Colombia, as well as 745 journalists, 174 of whom international.

Cosmoprof Worldwide Bologna, which took place 7-10 March, closed its 2013 edition with record-breaking figures: 193,842 visitors (14% increase) including 48,823 international (22% increase).
2,390 exhibitors including 1,500 international, 24 national groups with new entries from Japan, India, Indonesia, Pakistan and Colombia.
Italy (with 38,919 sq.m. of space and 666 exhibitors), China (with 6,029 sq.m. of space and 272 exhibitors) and France (with 5,427 sq.m. of space and 161 exhibitors) topped the list of leading countries. Other countries with significant figures included the US (143 exhibitors), Germany (125 exhibitors) and Spain (113 exhibitors). India, participating for the first time, bought 494 sq.m. of space and had 21 exhibitors, Pakistan had 15 and Japan had 12.
The delegation of Chinese buyers (invited by BolognaFiere China in partnership with the China Commerce Association for General Merchandise, based in Beijing, with over 800 members, including major department stores and chains of shops, distributors and wholesalers) held over 200 meetings.
Within Cosmoprof there was a new location for Cosmopack, a kind of “show within the show”, an exhibition area dedicated to packaging, machinery and contract production. This formula proved to be very popular and drew visitors’ attention to a production supply chain where the Made in Italy brand has been playing a leading role.
Cosmoprof Worldwide Bologna 2013 hosted 745 journalists, 174 of whom international, who were greeted for the first time by a digital system with eight spectacular mega-screens broadcasting events of special interest (as well as live streaming on the cosmoprof.com website). The 46th edition included overall 35 hours of television, 20 live streaming sessions and 80 interviews with major players in the international market, while national and international television channels documented the various aspects of the fair. There was also a massive amount of communication on social media: visitors to Cosmoprof uploaded 6,000 photos onto Instagram in just three days. There were 44,731 followers on Facebook, 2,000 more than on 7 March, and 981 followers on Twitter, an increase of 600 since the beginning of the event thanks in part to the real-time broadcasting of visitors’ tweets on screens at the fair. There were also over 1,000 viewings of videos uploaded onto YouTube during the exhibition. The Cosmoprof site had 71,808 individual visitors throughout the event, with the highest numbers coming from Italy, Germany, the US and France (an increase of 17%).
Cosmoprof Worldwide Bologna will be back next year in Bologna, 11-14 April 2014.