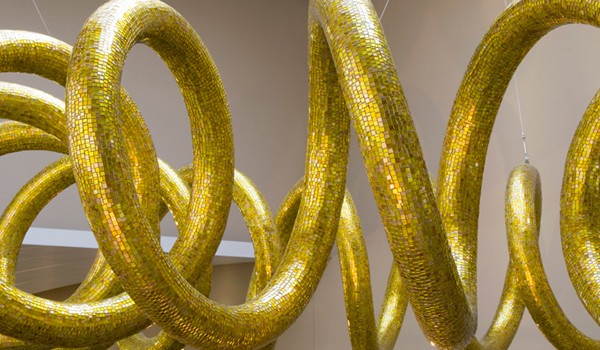 The Corning Museum of Glass will unveil its 2011 Rakow Commission on 21 October: Five Pods by Seattle-based artist Ann Gardner, the first glass mosaic artist to be awarded a Rakow Commission.

The Corning Museum of Glass will unveil its 2011 Rakow Commission on 21 October: Five Pods by Seattle-based artist Ann Gardner.
Gardner, who is the first glass mosaic artist to be awarded a Rakow Commission, instils a unique three dimensionality in her works. Gardner initially worked in hand-painted ceramic tile and shard mosaics, before experimenting with glass pieces. Her large sculptures covered in shimmering glass tiles can be found in buildings and public spaces throughout the country, including Lumen a golden 16-foot diameter circular spiral that hangs at the San Antonio International Airport, and Danza del Cerchio, a colourful wall of interlocking and overlaying circles at Pier 66 in Seattle.
Five Pods was created with small, individually cut coloured glass tiles backed with metal foil. Gardner uses glass mosaic as a skin on the piece’s sculptural form. The ring of connected pods is almost seven feet in diameter, and the curved shapes reflect light in a dramatic, yet restrained, way. In this piece, like in most of her work, Gardner strived for simplicity. She used only one colour of glass in Five Pods. The piece “has a quiet presence,” she says.
Tina Oldknow, curator of modern glass at The Corning Museum of Glass, chose Gardner as this year’s artist because of her ability to take the craft of glass mosaic beyond the two dimensional, noting that her works make use not only of reflecting light, but also of reflecting shadow. Says Gardner, “Light and shadow are more and more important to me in pretty subtle ways… Glass is something that transmits light. There is no other material like that. And it is stable in that way, and it is beautiful in that way.”
Inaugurated in 1986, the Rakow Commission is awarded to professional artists whose work is not yet represented in the Museum’s collection. The Commission supports new works of art in glass by encouraging emerging or established artists to venture into new areas that they might otherwise be unable to explore because of financial limitations. It is made possible through the generosity of the late Dr. and Mrs. Leonard S. Rakow, Fellows, friends, and benefactors of the Museum.
Each commissioned work is added to the Museum’s permanent collection and is displayed publicly, in the Museum’s Modern Glass Gallery, for the first time during the Museum’s Annual Seminar on Glass. Five Pods will be unveiled on 21 October 2011, following a public lecture by the artist. The lecture is one of several upcoming live-streaming events offered by the Museum, including specified lectures from the Annual Seminar on Glass, live glassblowing demonstrations at The Studio and Meet the Artist lectures. More information about live streamed events from the Museum can be found at www.cmog.org/live.