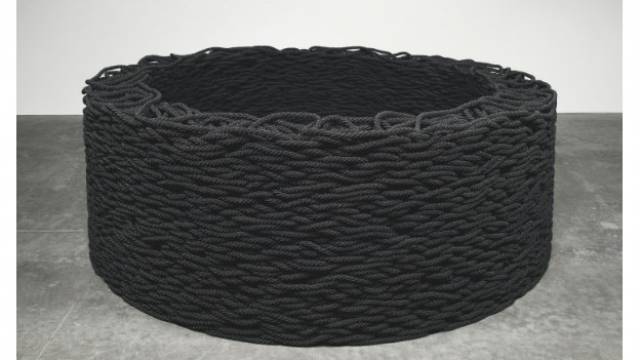 The Corning Museum of Glass has acquired Continuous Mile, an ambitious large-scale sculpture by contemporary artist Liza Lou (American, b. 1969), to be installed in the Museum’s North Wing contemporary galleries, which will open in late 2014.

Continuous Mile (2006-08) is a monumental sculpture composed of 4.5 million, glossy, black glass beads woven onto a mile-long cotton rope that is coiled and stacked. Standing about 3 feet high and stretching nearly five feet in diameter, the sculpture took Lou two years to make with a team of beadworkers from several townships in KwaZulu-Natal, South Africa. Conceived as a work about work, Continuous Mile is exquisitely made and manifests the social concerns that run throughout the artist’s work.
“We look forward to inaugurating our new North Wing galleries with Liza Lou’s large-scale work,” said Karol Wight, executive director of The Corning Museum of Glass. “The new galleries will be devoted to the display and interpretation of contemporary art in glass and we look forward to highlighting artists like Liza Lou, who are pushing the boundaries of how glass is used in art today.”
“Liza Lou has redefined beading by removing it from a decorative context,” said Tina Oldknow, curator of modern glass at The Corning Museum of Glass. “Trained as a painter, Lou used coloured lines of beads like brushstrokes to decorate the surfaces of her early sculptures and installations. In her more recent work, such as Continuous Mile, the bead no longer decorates the surface, but actually creates sculptural form.”
Lou creates meticulously beaded works that reference recurring themes, such as labour, confinement, wonder, and human endurance. Lou emerged as a presence in the art world in 1996 with Kitchen (1991–96), a nearly life-size reproduction of a kitchen entirely covered in beads, which was featured in an exhibition at the New Museum in New York. The work is an over-the-top commentary on women’s work, popular culture and nostalgia, complete with a perfectly beaded crumpled bag of potato chips, a spilled soft drink, and a sink full of dishes in water. Lou has gone on to explore diverse subjects through the course of her prolific career. Examples of her other work include Security Fence (2005) is a full-scale, silver beaded enclosure of chain-link and razor wire that can neither be entered nor exited. Untitled 10 (2011–2012) is one of a series of monochromatic beaded paintings in the tradition of American minimalist painters such as Agnes Martin, Sol LeWitt, and Robert Ryman.
Awarded a Macarthur “genius grant” in 2002, Lou, who is also based in Los Angeles, opened a second studio in Durban, South Africa in 2005. Working with a team of Zulu women in downtown Durban, Lou has developed an economically sustainable project, while creating extraordinary artworks that she could not realize on her own.
Her works are represented in international museum collections including The Whitney Museum of American Art, New York; The Cleveland Museum of Art, Ohio; The Metropolitan Museum of Art, New York; Fondation Cartier pour l’art contemporain, Paris, France; François Pinault Foundation, Palazzo Grassi, Venice, Italy; Deste Foundation for Contemporary Art, Athens, Greece; La Fundación/Colección Jumex, Mexico City, Mexico; Fundación Privada Sorigué, Lleida, Spain; and the Honart Museum, Teheran, Iran.
The Corning Museum of Glass is currently adding a North Wing, designed by Thomas Phifer, which will open in late 2014. The 100,000-square-foot North Wing addition will include one of the world’s largest facilities for glassblowing demonstrations and live glass design sessions and a new 26,000-square-foot contemporary art gallery building. The galleries will feature a simple, white interior with massive curvilinear concrete walls. Continuous Mile will be presented in the open architectural space along with other large-scale works. The building will be the largest space anywhere dedicated to the presentation of contemporary art in glass.