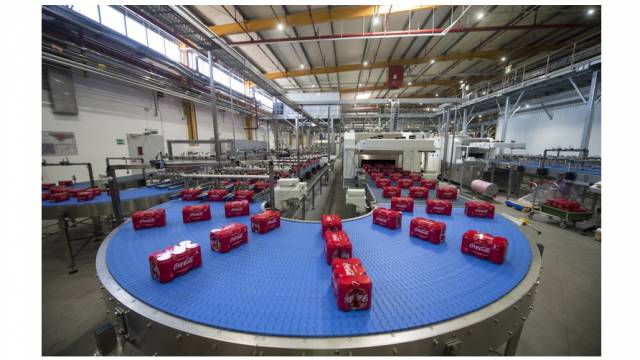 Coca-Cola Hellenic Bottling Company has installed a high-speed bottling line at its Timisoara plant, Romania, to serve both the Romanian market and the European markets in the future.

Coca-Cola Hellenic Bottling Company (HBC) has inaugurated a high-speed bottling line at its Timisoara plant, following a EUR 7 million (USD 7.9 million) investment.
With a maximum production capacity of 90,000 units per hour in 330 ml and 500 ml bottles, the new line will serve both the Romanian market and the European markets in the future, Coca Cola said in a press release. The project started in November 2016, and the testing period was completed in late May 2017.
“We are committed to investing further, Romania is a very important market within the Coca-Cola HBC Group, and we are very excited about what’s coming next,” Coca-Cola HBC Romania general manager Jaak Mikke said.
Timisoara factory also has the most energy-efficient bottling line and the one with the lowest water consumption per litre of beverage produced, Coca Cola said.
The Coca-Cola HBC factory in Timisoara was inaugurated on August 1995 and currently bottles Coca-Cola, Fanta, Sprite, Schweppes, Nestea and Joy products. These products serve both the Romanian market, except for Joy, and other countries where the Timisoara plant exports, such as Bulgaria, Croatia, Bosnia and Herzegovina, Macedonia and Greece.
Coca-Cola HBC started operations in Romania in 1991 and currently employs 1,700 people.
Besides the Timisoara factory, Coca Cola operates two other plants in Romania.
One was inaugurated in 2012 in the southern city of Ploiesti following a EUR 22 million investment, making Romania a regional production hub which exports Cappy Pulpy to six countries across Central and Eastern Europe.
The other one, located in Poiana Negrii in the northern county of Suceava, has been part of an extensive investment programme, since 2002, when Coca-Cola acquired the production capacities and the springs in Dorna area.
In September 2015, Coca Cola decided to close the factory in Moldova’s capital Chisinau and to supply the local market from its plants in Romania and Ukraine.