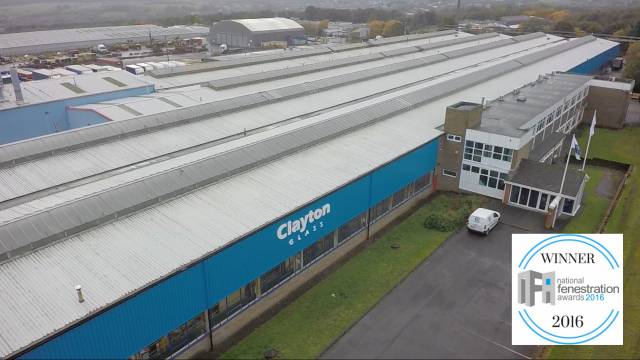 Clayton Glass has won IGU Manufacturer 2016 in the National Fenestration Awards for a second successive year, following on from the same achievement they recorded in 2015, this time receiving nearly half of the votes.

As one of only two companies to achieve three figures, Clayton Glass accounted for 47% of the total vote, which was more than twice that of the second placed finalist for IGU Manufacturer 2016. The National Fenestration Awards has become an increasingly popular industry awards platform, covering 17 different and far ranging categories, with votes carefully collected and checked to ensure completely transparency and fairness.
Ryan Green, managing director of Clayton Glass, said “This award fully reflects us as a forward thinking and pioneering glass manufacturer. A huge thanks you must go out to our staff who work tirelessly and to our customers who have taken the time to vote.
“Receiving such lofty accolades, shows that as one of the UK’s largest independent and owner managed glass manufacturing businesses, that we are well placed for the future, with firm business plans to sets us further apart from our peers with Clayton Glass and also our SMARTGLASS® brand. I would also like express my thanks to the organisers and congratulations to our fellow category winners.”