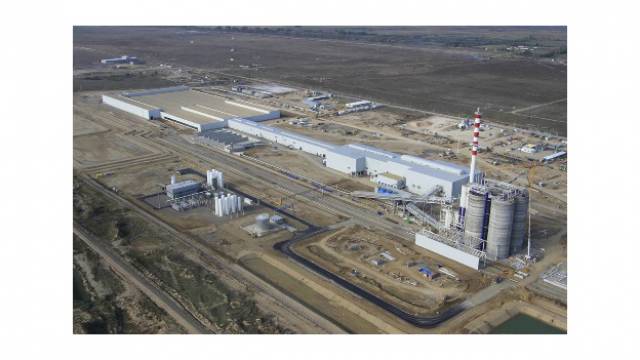 Caspian float glass has announced that it shipped 92,000 tons of glass in 2014, and has already delivered 17.6 thousand tons this year. Production is currently running at full capacity, with glass for the production of mirrors, automotive glass, laminated glass and toughened glass.

In 2014, Caspian float glass plant shipped 92,000 tons of glass, according to a recent press release of the company. According to the release, in January this year, consumers have already received 17.6 thousand tons.
“More than 10% of the production plant is exported to Turkey, Georgia, Azerbaijan. This year, we have signed contracts for the supply of flat glass both for Russian consumers and for export. Production is currently running at full capacity, manufacturing M1 and M0 glass, suitable for the production of mirrors, automotive glass, laminated glass and toughened glass,” continues the release.
However, due to the growth in production of flat glass and to further develop the need to create the country’s own raw material base for quartz sand and dolomite, currently being imported.
“Creating its own resource base will allow Caspian float glass plant to optimize the costs of production of flat glass, improve the competitiveness of the plant’s products in the market. Moreover, it will also allow the company to begin to address long-term tasks such as the production of tinted, energy-saving and solar control glass. The construction of a mining and processing plant for the extraction and processing of quartz sand and dolomite will employ more than 150 people, as well as increase tax revenues,” concluded the release.