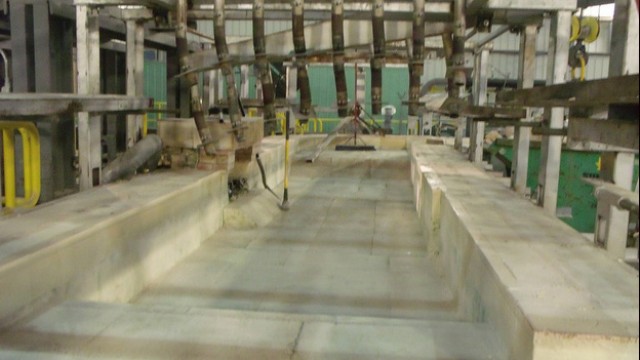 Workers at Bennu Glass in Kalama, Washington, are busy making room for the new square-shaped liquid oxygen-fuelled melter, a proven method which heats molten glass to 2,800°F, which will be installed in May.

The expansive electric melter and its huge reservoir of hardened glass is gone at Bennu Glass in Kalama, Washington. Meanwhile, workers continue removing the structural supports that held it together as they make room for the new glass furnace that replaces the melter.

Bennu purchased most of Cameronʼs assets through foreclosure after Cameron filed chapter 7 bankruptcy in 2009.

Workers at the Bennu Glass plant have chiselled away tons hardened glass from the crippled melter of the wine bottle plant here, and a new furnace and 100 employees should be ready to restart the plant in July, company officials say.

Most important is the replacement of the 400-ton electric melter, or furnace.

Contract workers have disassembled the metal bracketing that supported the two-story electric melter, which was shaped like an octagon. A new, square-shaped liquid oxygen-fuelled melter, a proven method which heats molten glass to 2,800°F, will be installed in May.

Bennu, which plans to produce 100 million bottles a year, is owned by New York-based financial firm Medley Capital, which has invested about USD 30 million in the plant’s revival.