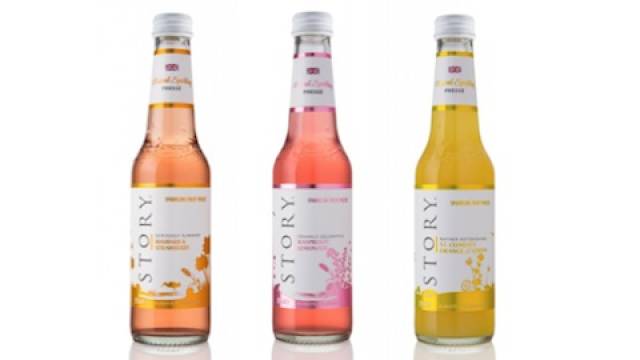 STORY’s range of sparkling fruit pressés has been given a unique new look thanks to the creativity of glass packaging manufacturer Beatson Clark.

Five years after launch, STORY Director Julian Sollom wanted to evolve the soft drinks brand and approached Beatson Clark about designing a bespoke bottle. Beatson Clark’s designers took the label artwork as a starting point and created a bottle which features an idyllic country scene embossed continuously around the entire shoulder.
The bottle shares mould equipment with a container from Beatson Clark’s general sale range, so the cost to the customer was reduced by more than half compared to a completely bespoke design. “We had been wondering how best to evolve the branding and it was only after a meeting with the Beatson Clark sales team that the opportunity to create a bespoke bottle was explored in more detail,” said Julian. “We chose Beatson Clark because of their very pragmatic approach to this project, the compelling design they created for us, the time they took to understand what we wanted and the flexibility they showed in bringing the project to life. “The end result is a stunning design and a bespoke bottle that has received great feedback from everyone who has seen it. We wouldn’t hesitate to recommend them!”
STORY was launched in 2011 to fill a gap in the market for soft drinks that would appeal to both children and adults as well as those looking for an alternative to alcohol on an evening out.
There are currently eight flavours in the range: White Grape & Elderflower; Raspberry Lemonade; Red Grape, Ginger & Blackcurrant; Cloudy Lemonade; St Clements Orange & Lemon; Apple & Ginger; Rhubarb & Strawberry; and Sloe Lemonade.
Chris Palmer, Business Development Manager, at Beatson Clark, said the new bottle is a good example of the company’s flexibility and creativity.
“We’re really pleased with the embossing on this bottle as it looks beautiful and reinforces the brand values that STORY is trying to promote,” he said.
“We took a flexible, innovative approach to the project and delivered a cost-effective yet unique container for the client.”
STORY drinks are currently available in bars, restaurants, hotels and cafés but the company is investigating retail outlets too.