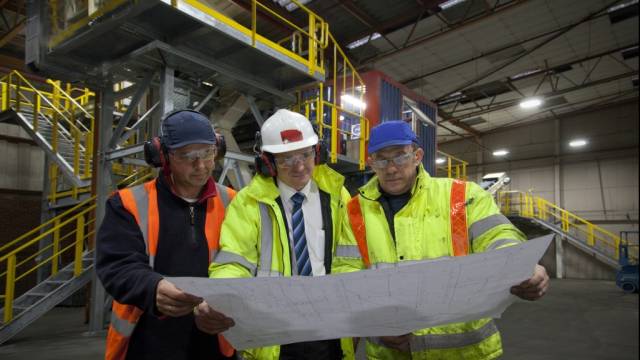 Beatson Clark has invested £840,000 in a new recycling plant.

The company, which makes glass bottles and jars for the food, drink and pharmaceutical sectors, holds the contract to manage Rotherham’s recycling collections.
Its recycling plant on Greasborough Road in the town receives 6,240 tonnes of mixed material from the council every year, of which 4,734 tonnes is glass.
Beatson Clark installed a new automated recycling system in October which will make recycling much faster and allow it to process more cullet (waste glass) for its furnaces.
The new plant processes six tonnes of materials per hour – almost twice the three and a half tonnes that Beatson Clark could process previously. Sorting was done manually but the new system has an optical sorting machine which uses light and cameras to sort glass of different colours and identify ceramics, stones and porcelain which can cause defects in the glass and damage the furnace if they’re not removed.
An over belt magnet and eddy current sorter will also pull out any metals from the glass and an automatic baler will bale the metals.. “Sourcing the right quantity of glass cullet can be difficult at times so our new, improved recycling plant will help to prevent us running short,” said Colin Saysell, Supply Chain Manager at Beatson Clark.
“The improvements will also help us to reduce our carbon footprint as the recycled material only has to travel a few metres from the plant to the furnace rather than being brought in from a recycling processor several miles away.”
All the glass recycled at Beatson Clark is used to make new bottles and jars, while the textiles, steel and aluminium are removed and sent on for further processing to our recycling partners.