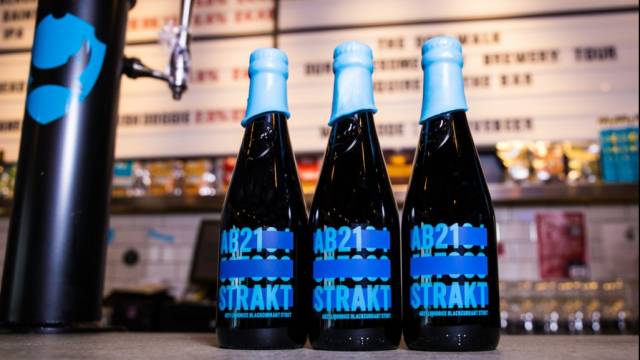 The 375ml embossed Champagne-style amber beer bottle has been produced for BrewDog’s Abstrakt range, described as ‘boundary pushing beers’ which transcend categories and excite imaginations.
The brewery releases only a very small number of limited edition batches of Abstrakt per year, and each batch is known only by its release code.
Recent Abstrakt brews include AB19, a 13.1% blend of two barrel-aged imperial saisons; AB20, a 14.2% Tiramisu oatmeal milk barley wine; a blend of an English barley wine brewed with coffee, oats and milk and a complex rum cask-aged imperial stout; and AB21, a 12% liquorice and blackcurrant infused imperial stout.
The new bottle has the BrewDog logo embossed on the shoulder and complements the 660ml Vichy beer bottle which Beatson Clark already supplies to the brewery.
“We’ve worked with BrewDog for several years so we’re pleased that they have come back to us for this special design,” said Chris Palmer, Business Development Manager at Beatson Clark.
“Our in-house design service is second to none and something which customers really appreciate. We are also able to manufacture bespoke bottles at small volumes, which almost certainly helped us to win the contract in this case.”