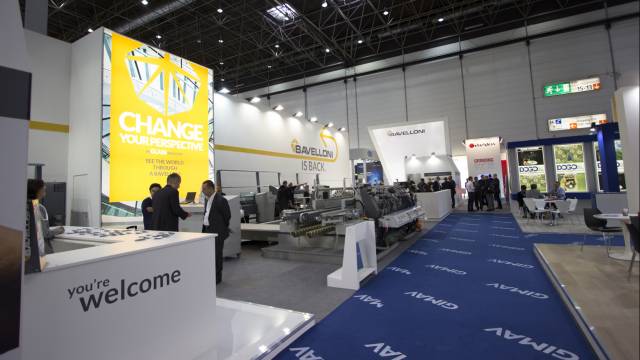 After its change of ownership in July 2015, the debut on the Düsseldorf international stage was a significant event for the young Company with the very important past.

The company says the market welcomed with great enthusiasm the return into Italian hands of this historical brand, synonym of excellence in the flat glass field, of its traditional know-how and production, totally made-in-Italy in its facilities in Lentate sul Seveso.
The products and the innovations presented during four-day live demos elicited great interest (bavelloni.com/en/glasstec/). The double-edging machines, represented by the HE500 11 3000, have been the true hit of this edition, as well as the working centers, especially the new CNC machine NRG 420 POWER JET, with its Bavelloni “heart” (the operating head spindle is fully designed and assembled in-house). The well-known VE series straight line edgers and the VB series beveling machines were also on display.
The open stand attracted a large number of specialists from all over the world. There was a significant presence from the South American markets, also from Spain, Benelux and South Africa; while attendance from Russia, the Eastern Europe countries and Asia were stable. Optimism was also seen from overseas countries, such as New Zealand and Australia. Customers expressed enthusiasm and trust to the shareholders for this genuine Italian project. Mr. Franco Pirola, Bavelloni S.p.A Sales Director and Partner, commented “I have never met so many clients as in this edition, and more than one thanked us for bringing Bavelloni brand back to Italy. We are very proud of that. We worked with passion along this year full of changes. The positive feedback we are receiving from the markets about today’s Bavelloni is the most encouraging message and let us look to the future with increased energy.”
Even the widespread sales network, very active and well organized, shared the positive results after the event.  All partners are proud to represent Bavelloni in the world. They showed appreciation for the launch of the new products and for the announcement of the other projects being released in the near future. During the exhibition many leads for important negotiations were collected, as well as several concrete orders that will be delivered in the coming months.
So, many goals reached on all fronts for Bavelloni S.p.A. that consolidates its new image and restate its role of global player with winning products and ideas.
New working center NRG 420 POWER JET at Glasstec 2016
The new four axis working center Bavelloni NRG 420 Power Jet carries out edging, milling, drilling (as well as beveling, engraving, cutting by disc, polishing by cup wheels through specific aggregates) of maximum 4200x2300mm size glass sheets. The machine is equipped with the new electro-spindle fully designed and assembled by Bavelloni S.p.A., granting top quality and reliability. The innovative front door, unique in the market with new concept up and down movement (patent pending) opens and closes in a completely automatic way, making the loading and unloading operations easier for the operator. NRG 420 PJ is fitted with the Power Jet device that rotating from 0° to 360° allows to direct and keep the water jets for the wheels refrigeration exactly on the contact point with the glass profile.  This patented system ensures a longer life of the tools, increased working speed and minimum set-up times. At Glasstec the customers could also evaluate the PAV patented system. The automatic positioning of the suction cups and of the centering devices on the work table enables a very fast and easy format change, with set-up time’s decrease up to 40% compared to the standard systems.
Just days after the conclusion of Glasstec 2016, the feedback is positive outcome and targets achieved.