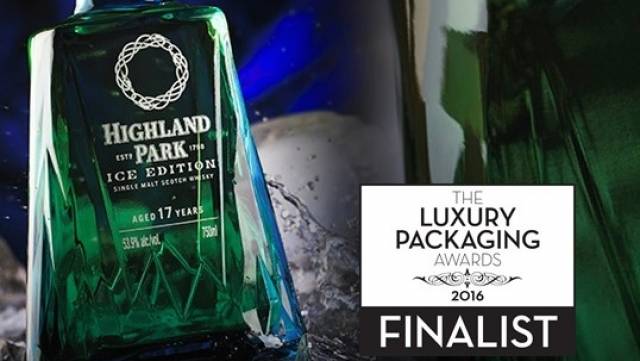 Allied Glass working in partnership with The Edrington Group and William Grant and Sons, has been shortlisted in two categories for the 2016 Luxury Packaging Awards.

In the Drinks Bottle Category, the Edrington Group’s stunning Highland Park ICE Edition has been shortlisted and William Grants exquisite Balvenie D.C.S. Compendium has also received shortlisting within the Special Edition category.
The brief for the Balvenie D.C.S. Compendium was to create a pack which expounded the exceptional and prestigious nature of the spirit whilst advancing the iconic Balvenie branding. The result is a stunning bottle, which stays true to the existing Balvenie container but has been given luxury connotations by being larger, heavier in weight and with a thicker base, all of which reinforce the quality status of the collection.
Of the most exacting visual standards, each bottle is manufactured in stunning extra white premium flint glass which is made of the highest quality raw materials which creates brilliant sparkle and exceptional brightness whilst ensuring that the natural colour variants of the collection are displayed in their truest form and each superlative whisky is the hero.
The Highland Park ICE Edition delves into the world of classic Norse mythology. A stunning expression with exceptional packaging, it celebrates the Viking roots of Highland Park’s Orkney Islands home, where their influence and culture were woven for hundreds of years before the single malt Scotch whisky was created. According to legend, the Ice Realm, Nilfheim is the home of darkness, cold, ice and frost. The first Ice Giant, Ymir was born at the beginning of time when the edge of the Ice Realm melted from the heat of the neighbouring Fire Realm, Muspelheim, as they met in the middle of a land of emptiness known as Ginnungagap.
According to Norse myths, while the evil Ymir giant slept, he gave birth to his family, a race of Ice giants with superhuman powers. Each giant was said to be 20 to 30 feet tall, and along with the Fire Giants, involved in continuous battles.
It was this mythology that inspired the design for this exceptional bottle, a bottle which reflects the very best in creativity in glass through its stylish and complex design. In beautiful bespoke blue glass, the unique bottle was created to reflect the dazzling and glittering ice, the distinctive bottle shape having been intricately embossed with delicate ice shards which were specifically created to evoke the sharpness and coolness of the Ice Realm.
Expertly decorated in Allied’s decoration facility, the exquisite circle design on the front panel of the bottle represents the circle of life, the creation of the world.
The winners of the Luxury Packaging Awards will be announced on the 14th September 2016.