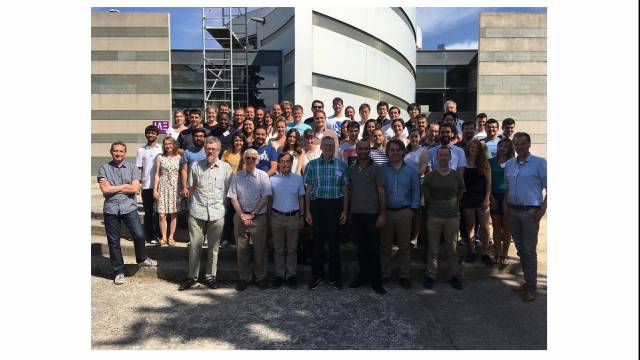 This year, the 9th edition of the ICG Summer School attracted students from countries such as Japan, USA, Colombia and Brazil.

This year’s ICG Montpellier Summer School – the 9th edition – took place over a period of five days and attracted about 50 students, some coming from Japan, USA, Colombia and Brazil.
These ICG Montpellier Summer Schools are aimed at those just starting research in the area of Glass Technology. This year, 37 attendees came from academia and 12 from several different glass manufacturers. The School timetable consisted of 18 formal one hour lectures either on a pure science theme (glass formation, structure and properties) or mathematical modelling (how numerical modelling can respond to the technological challenges in glasses). All the students were together on the first day but then split into two groups for the remainder of the event.
On the first afternoon, each student was expected to introduce their research interests to the rest of the group. The aim was to improve confidence in presentational skills, to identify subject interests for project allocation, and also to make the group aware of the wide range of the subject of glass technology and the analytical techniques being used.
The formal activities of the day concluded with a detailed presentation from Dr Manoj Choudhary of Owens Corning and also current ICG President. He spoke on the proper treatment of heat transfer by radiation in a partially absorbing medium and how this influences processing of glass.
Tuesday followed the same pattern except as two separate streams from 11am to lunch time. After lunch came the allocation of projects, 8 in total with 6 students in each group. They were given their tasks but unfortunately no one was ready to capture the surprised expressions on many of their faces. These exercises were open ended with the goal of giving a 15 minute presentation at the end of the week analysing the key issues involved and how they might be investigated. The groups were selected to mix students from different backgrounds and so formed a major part of the network building philosophy of the school. Lecturers made themselves available for consultation while the students used their knowledge and internet searching skills to begin to crack the problems set.
One Wednesday afternoon the students were given the chance to attend ad hoc tutorials with several of the lecturers and these proved very popular.
Thursday marked the conclusion of the more formal part of the teaching process. Both streams of students were brought together again for a lecture on Project Planning in Industry with interesting insights into the differences between PhD projects and real industrial process development.
Friday morning marked the close of the school with several having to leave before lunch to catch both flights and trains home. Just a few stayed on for another day or two to explore Montpellier itself. But before leaving we had our project presentations. With such a large group this year, time pressures were significant and some groups managed to avoid the intense grilling that presentations in previous years have received. Nevertheless the event went well and finally, after a 25 minute deliberation by the judges, first, second and third places were awarded. The project titles were respectively: 1) Given the environmental problems caused by polymer microbeads in shampoos would glass microbeads be a better choice? 2) Some glass beads ancient (3400 years old) recently discovered in graves in Denmark were alleged to have come from Egypt. How would you confirm this? 3) There is currently considerable interest in glasses made under extreme conditions (experimentally and computationally). What glass system would you like to investigate, how would you attempt this and what properties of the resulting glass would you investigate?
We acknowledge with thanks this year’s lecturers who give of their time freely and often stay in the same student accommodation as the delegates to keep costs low. This year 16 individuals contributed to the school at no charge: K. Bange, M. Choudhary, R. Conradt, L. Cormier, P. Florian, E. Gouillart, R. Hand, A. Habraken, B. Hehlen, A. Karadag, H. Mahrenholtz, F. Maurer, H. Mueller-Simon, J. Parker, M. Pascual, A. Takada. Of these R.Conradt, B. Hehlen, J. Parker, A Takada and M Hubert were responsible for the overall planning and publicity for the two themes of the event. We would also like to acknowledge the hard work of Mylene Boscus, the course administrator, and Bernard Hehlen who is the local contact point for all academic matters.
Next year is being planned as a jamboree to celebrate 10 years of schools and will include a major publication describing the history of the school and including academic reviews by those who have contributed the teaching content over this period. The school will run from 2nd-7th July i.e. extended to Saturday morning so that delegates wishing to attend the ESG meeting in St Malo starting on 8th July can easily do so. Competition for places is likely to be intense so book early. ICG is also planning to facilitate student exchanges between the Summer School in Montpellier and the Winter School in China by providing student bursaries to cover the extra costs of travel. Watch this space (www.icglass.org/education/) for further information. ICG is a non-profit international GLASS SOCIETY consisting of 37 national organizations in glass science and technology. The aim of ICG is to promote cooperation between glass experts. ICG organizes Technical Committee (TC) work (laboratory round robins, publication of scientific and technical papers). ICG organizes the International Congress on Glass every three years.