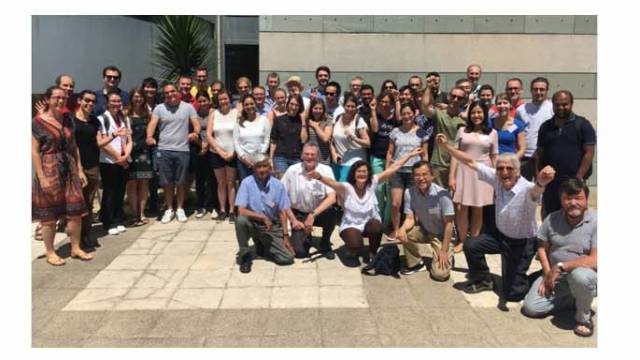 The 10th ICG Summer School took place at the University of Montpellier, France, and covered topics ranging from traditional glass science, along with a stream on biomaterials.

This year marked the 10th Anniversary of the ICG Summer Schools, which took place as usual at the University of Montpellier, France.
The first day was run as a single session for both the basic science stream and for those who had come to learn about bio and pharma glasses. 40 students were present, of whom a quarter where primarily registered for the bio stream.
In the afternoon the students were each allocated a 3-minute slot to introduce themselves and explain their research interests. The last lecture of the day was given by Prof Delia Brauer gave everyone the opportunity to learn of the latest research in biomaterials.
Over the next three days the class divided into two groups following the traditional Glass Science courses used for the previous 9 years and a stream on biomaterials that included the use of glasses to repair body parts, such as teeth and bones and was followed by an in-depth discussion of the design of glass containers for specialist products in the pharmaceutical industry. The chemical durability of glasses formed an important theme carried over from the first day into these specialist lectures.
Projects were allocated on the second afternoon to the students in groups of five, with the deliberate aim of mixing people with different backgrounds and expertise. For one hour on each of Wednesday and Thursday afternoons small group tutorials were held to explore topics introduced earlier in greater depth and more interactively. The tutorials proved particularly popular this year and there was significant demand for more such interactive sessions and slightly fewer formal lectures.
On the final morning everyone came together again for topics that introduced the applications of science in an industrial context. These helped to indicate the kinds of career paths that might be available. Each participant was given a copy of the text book created over the previous 8 months in celebration of the Anniversary.
In the afternoon the students took the floor to present the conclusions of their project work. Eight groups spoke on topics that covered a wide range of subjects. The winning group, consisting of Petr Chrast, Susanta Sengupta, Julia Wei?huhn, Bulat Sydykov and Marcela Arango Ospina; their topic was: ‘Is it accurate to describe the silica rich exoskeleton of certain deep sea creatures as glassy? Can an understanding of the way biological processes naturally produce complex structures based on glassy materials help us to develop new materials?’
A group from Wuhan University joined the sessions to see how the Montpellier Schools compared with the more recently developed Winter Schools in Wuhan. A representative of Prof Peng Shou, Prof Pan also gave a talk on the Chinese Glass Industry to conclude the morning session.
Next year’s Summer School will be from 8-12 July again in Montpellier, with a Winter School in taking place in Wuhan 5-9 November 2018.
Many thanks go to the speakers – all of whom give their time without payment – the course could not run without their contribution. The speakers on the Basic Science course were, in order of presentation: J Parker, R Conradt, D Brauer, R Vacher, P Florian, H Inoue, J Deubener, J C Sangleboeuf, A Takada, B Hehlen, M Choudhary, R Hand, K Bange, Prof Pan, and on the Biomaterials options: R Hill, L Hupa, A Boccaccini, M Guglielmi and D Zuccato.
More information about both is on the ICG Web site (icglass.org).