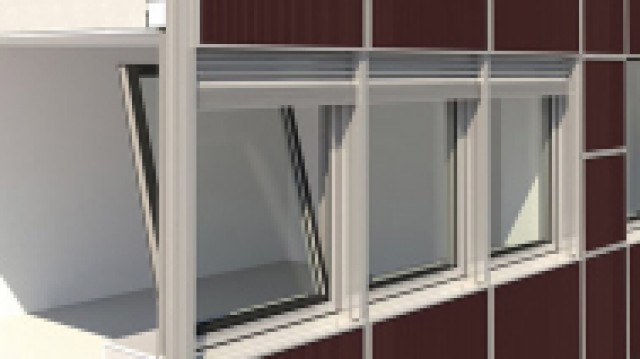 At Ecobuild 2012, visitors will be able to see examples of Schueco UK’s products for aluminium and steel systems, façades, and solar energy products.

Schueco UK, leading sponsor of Ecobuild 2012, will have on show examples of its aluminium and steel systems, some of which are new to the UK and all of which underline its status as a world-class company, in addition to its solar energy products.
The company’s exhibits include two aluminium façade systems incorporating Schueco ProSol TF+ thin-film PV technology, together with a ProSol-enabled brise soleil. Schueco’s unique ERC 50 Renovation Façade, and the Janisol Arte insulated steel renovation window from Schueco Jansen, are making their UK debut. The latter recently won a Gold Design Award at France’s leading building exhibition, Batimat 2011.
Other products on show include a heavily insulated door and façade that meet PassivHaus standards, and Schueco ASS 77 PD.NI, the first in a new range of ‘panoramic’ motorized sliding doors. Able to accommodate very large openings (up to 3.5 metres high by 3.2 metres wide), these doors have minimal profile face widths of the central meeting stiles and outer frames that are completely concealed in the building structure on all four sides to give maximum light transparency.
The company also has on show solar products such as roof-mounted thermal collectors and PV modules from its Premium and Compact Line systems; Schueco TF+ thin-film PV modules; current pump-stations and controllers, as well as a newly introduced controller and pump; roof anchors and under-construction; inverters and a Sunalyzer Web PR data logger.
A working e-bike also illustrated the diverse ways in which solar power may be used.